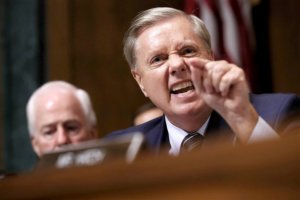 Prostitute: The definition of a prostitute is a person who accepts money for sexual services, or sells their integrity for an unworthy purpose.

As quickly as the bankruptcy expert’s enablers can ram it through, a petulant child nominated by another petulant child will become a Supreme Court justice. The entitled Brett Kavanaugh bitched and moaned a filibuster at yesterday’s Senate hearings in an amazingly stark display of partisanship and immaturity. In contrast, earlier in the day we witnessed the exact opposite with Dr. Ford. She was gracious and forthcoming as the cowardly old white men of the bankruptcy expert’s party sat silent, lurking in the corner, having hired a woman to do their bidding. Now there’s a collective profile in courage. It was only when crybaby Brett was in deep in his non-answers that Lindsay Graham sprung into action. Suddenly Graham was just outraged, I tell you, with how low this country has sunk. Of course, he didn’t bother to mention how he had sold his soul to a racist, xenophobic president espousing anti-American principles. Of course, he didn’t mention how the former party of Lincoln had corrupted the Supreme Court by not allowing the rightful vote, up or down, on President Obama’s Supreme Court justice nominee. Graham didn’t do this because he has all but totally prostituted himself at the altar of the bankruptcy expert.

Just what happened to this guy? This obviously is not John McCain’s Lindsay Graham. Because of this, there is another nail in the coffin of the Supreme Court being a legitimate institution fairly judging laws. Graham could have called out the absurd vast left wing conspiracy espoused by little baby Brett. He could have pointed out that these were the same words used by Hillary in regards to the — you guessed it — vast right wing conspiracy. Ironically, crybaby Brett had the audacity to claim that Clinton forces were at work trying to derail him.

Conspiracy? Come on, Lindsay. Man up. How does a dignified woman (6 years before Kavanaugh’s nomination!) speak to her therapist about Brett Kavanaugh sexually assaulting her when she was just 15 amount to a conspiracy? Shame on you, Lindsay Graham.

One Response to “The new Stormy Daniels”