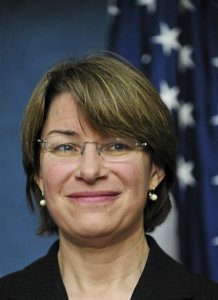 Minnesota Senator Amy Klobuchar showed dignity and grace under pressure when she could have completely obliterated Brett “I like beer” Kavanaugh with his taunts of asking her if she had ever blacked out from too much drinking. But she took the high road, which is but the tip of the iceberg on why our country needs her as its next president.

Minnesota has arguably one of the finest political traditions of any state. It didn’t have Democrats and Republicans; it had members of the Democratic-Farmer-Labor Party and the Independent Republican Party. In essence, these folks were telling the national parties that Minnesotans are not comprised of groups that can be typecast or stereotyped. And it’s easy to see why.

Minnesotans tend not to be a flashy lot. After having lived in other major metros, a visitor to the Twin Cities, much less the countryside, will experience why the slogan “Minnesota Nice” is actually true. They’ll also notice Democrats may have some liberal leanings but not at the expense of getting things done and that Republicans might have conservative fiscal views but with a genuine empathy for those in need. The civility in the numerous debates between gubernatorial candidates, Democrat Tim Walz and Republican Jeff Johnson, speaks to this and has been nothing less than astounding…they like each other and talk issues! Go figure.

From this environment, and from a schoolteacher mom and a journalist dad, Amy Klobuchar has flourished in public service, first as the tough Hennepin County attorney and now as a United States senator. She is whip-smart but in an understated way. She has somehow remained a decent human being even when having to work in the ever-increasing cesspool that is American politics. And she’s done this with many of her staunchest opponents still having great affection and respect for her. Do I even need to state how in dire need we are of this today?

Run, Amy, run! And pick a Republican as your running mate…

One Response to “We need Amy”