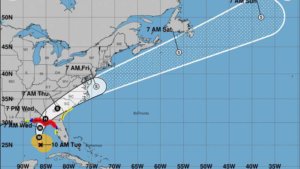 If there is a silver lining to Hurricane Michael, it is that it has been fast-moving. Think back to last year and the pulverizing Hurricane Harvey. Harvey just seemed to never leave — over four days many areas had 40 inches of rain, as it caused massive destruction and $125 billion in damage. With Michael, it is gone from Florida in a few hours and buzzing through Georgia, South Carolina and North Carolina as a storm, not a hurricane. By tomorrow at this time, Michael will be bidding farewell to land as it continues to head east out over the Atlantic.

My guess (and hope) is that Michael will have caused substantially less damage than Harvey and also be limited in its taking of lives. Part of this has to do with Michael not impacting any major population center, whereas Harvey crushed one of the most densely populated areas in the country. And, again, Michael might have been intense, but he didn’t stick around long.

A postscript on Michael necessarily has to include those individuals, including members of the media, who feel they can somehow withstand the onslaught of a direct hit by a hurricane. You. Can. Not. Some have mistakenly felt they have ridden out other hurricanes. Let me tell you this, if you are being directly hit by even a Category 1 hurricane, you are toast. False bravado is just that, false.

Some day, one of the ridiculous, attention/publicity-seeking reporters covering a hurricane from a dock, a beach, wherever, will be killed. Totally unnecessarily so. No tears. Their theatrics have nothing to do with informing the public, as good journalism does. Nope. It has everything to do with show business and ego. Reality tv which suddenly becomes….actually, reality! What a concept!

Lastly, in these times, everything is political, including the weather, and so is Michael. (That said, I do remember a blizzard way back in the ’70s that effectively doomed the incumbent mayor of Chicago. After all, streets do need to be plowed!) Michael will turn out to be a Republican hurricane. Florida Governor Rick Scott, a Republican, is running against incumbent Bill Nelson, a Democrat, for Senate. The race is extremely tight. But now Rick Scott gets a ton of free face time on statewide and nationwide television. In that Hurricane Michael will be far less damaging than others, such as Harvey and Katrina, it is likely that Scott will take a bow for this quirky result of nature. In short, with the bankruptcy expert stoking the relief effort, it would be unfathomable that the Panhandle wouldn’t make a quick recovery.