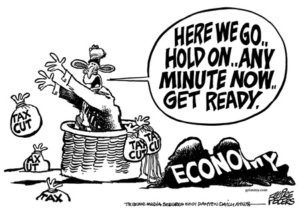 I remember my first credit card. I was 23. I was making very little money, driving a Nissan Sentra with a ton of miles on it and absolutely no frills — no air conditioning, no carpeting, not even a radio — and buying and freezing bags of White Castle sliders for future dinners and sometimes future breakfasts, too! Then I got my plastic.

Suddenly, I was taking friends to lunch and buying an incredible sound system for my car. Those Bose speakers were the best ever! And then there were those cash advances! Wow, it was great!

Of course, it wasn’t great at all. About two years from my first plastic, I landed a job that paid for more than a diet filled with White Castle. I moved into a better apartment, one without roaches. I bought some clothes needed for my new role as a young professional. I also noticed, much to my dismay, that my much healthier paycheck didn’t come close to paying off the thousands of dollars I had amassed in credit card debt. Thankfully, I bit the bullet then and made paying off that debt my number one priority, which I did even though it seemed to take forever.

Today, we live in a country in which the bankruptcy expert has given away billions of dollars to corporations with record profits and the increasingly richest of the rich during a time when the economy was not in need of stimulus and interest rates were still historically low. This cash giveaway tremendously added to our massive debt, which some would argue will effectively reach $2 trillion next year. And it gets worse. What happens when this year ends and all that debt needs to be financed again? Well, that cost to finance will be at least 50% more expensive due to ever-increasing interest rates and some financial experts think that the financing cost could even double.

But don’t worry because the economy is doing just so well the voodoo — oops, I mean, the magic of trickle-down economics will take care of all that red ink. Except. Except the opposite has happened. The deficit has grown. But just as frightening is the labor market. The last 20 months of the Obama administration averaged 211,000 jobs added. The first 20 months of the bankruptcy expert? Just 190,000. Likewise, real wage growth for the middle class, even in an economy that looks like it has full employment, has been all but non-existent.

The faux populist president has duped the majority of his red-meat supporters. His super-rich backers knew all along just how lucrative his administration would be for them. But the rank and file “Lock Her Up” spewers haven’t a clue. They actually believe this entitled petulant child was looking out for them. In reality, he has lined the pockets of the rich and mortgaged the future of just about everyone else, especially the lower income earners.

The time of reckoning for our sugar-addicted economy may not yet be at hand, though the bankruptcy expert seems, even for him, a bit over the top in his angst about the Fed being “crazy”. How dare the Fed rain on the Orange One’s fake economic boom? But sooner than later our country is going to have to act on the same insight I had as a 23-year-old. Creating debt by spending more than you take in and having to finance that debt with increasing interest rates is not just unsustainable, it’s suicidal. So it must stop.