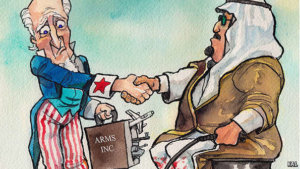 The powers that be in the country of Saudi Arabia are terrible people as well as completely out of touch with any semblance of reality. The Saudis, after countless denials that were enabled by the bankruptcy expert (out of total and absolute ignorance or out of total and absolute greed and power — you make the call) have suddenly discovered Washington Post columnist Jamal Khashoggi was indeed killed in its Istanbul consulate….by rogue actors, I tell you!

Somehow MBS, that’s the acronym for Mohammad bin Salman, who is the deputy prime minister under his Alzheimer’s-diseased prime minister daddy, did not have any knowledge of such a dastardly act. In fact, this guy is so pure his daddy now has become so clear-headed that he has his son heading up an initiative to find out how such a horrific thing could happen via the folks who brought us 9-11. Yep, but don’t worry. He’ll be back in a month with a full and comprehensive report that Absolutely. No. One. Will. Believe.

Hey, MBS baby, where is the body of Jamal Khashoggi? All I can say is that those punches in that fistfight must have been awfully cutting…legs, arms, fingers, whatever, flying here, there and everywhere.

If there is any solace in such a disgrace as the continuing relationship the United States has maintained with Saudi Arabia is that its horrific and inevitable evisceration of human rights and freedom of the press has finally and totally exposed just what barbarians these people are.

The bankruptcy expert can speak with avarice about all the money this sick country of Saudi Arabia spends on American products, most notably on so many things that kill people. But even his most blind supporters have got to see America surely has to reject such abject evil. Surely! Surely. Surely?