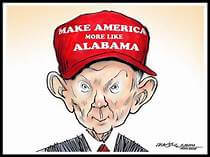 When a big part of a country’s formative history includes the subjugation of those native to the land and having massive amounts of labor provided via the enslaved from Africa, it’s safe to say that more recent issues of prejudice and violence, social and physical, did not materialize in a vacuum. Likewise, it’s wise to remember that Jim Crow laws were still on the books in the ’50s and race riots were commonplace in the ’60s. And though all of us, except Native Americans, have families that emigrated from outside America, we as an American people have an incredibly short memory and have made new ethnic groups entering the country incur our wrath. So, unfortunately, violence borne of hate and ignorance directed at individuals because of their race or religion does not surprise. This last decade in our country’s history has ripped open a scab on so many white Americans who are losing their tribal identity.

When Barack Obama was elected president, the vast majority of Americans felt a mixture of pride and relief. This was felt most fervently, no doubt, by Democrats and liberals, but there were also many Republicans and conservatives who shared similar feelings, if obviously not political philosophies. But this apparent step forward did not magically eradicate racism. If anything, Obama’s presidency likely coalesced racists’ groupthink. This allowed a southern senator from a state that did not even recognize the Martin Luther King Junior national holiday to begin the dog whistle to racists across the nation. Kentucky’s Mitch McConnell let it be known that the defeat of a black president was far more important than the health of the United States. McConnell and so many others of his ilk in the GOP enabled the blatantly racist birtherism to grow unchecked in their party. In retrospect, it is not surprising that the bankruptcy expert would find his home there. What is surprising is that so many Republicans either embrace the racism or choose to look the other way. And what is sad, if not potentially tragic, is that so many Republicans seemingly have no ability or perspective to prioritize. Specifically, they may want less government and lower taxes and may believe the bankruptcy expert can deliver this. But if he also taking dead aim on the rule of law and freedom of the press and is a racist — i.e. trying to destroy the very foundation of the country for his own selfish aims — doesn’t that completely overwhelm any of the lesser issues? And do they not see that Republican politicians have been the definitive enablers for such abhorrent behavior?