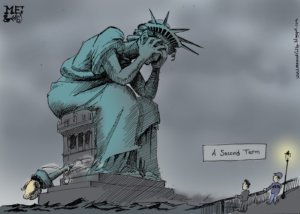 I wonder why the bankruptcy expert hasn’t called out that group which has been killing the innocents and trying to blow up those with whom they disagree? Where’s the outrage, old Orange One, with your own supporters who follow your words reinforcing physical harm to those that don’t follow in goosestep — er, I mean — lockstep with you?

Now, imagine for a moment, if the shooter wasn’t a bankruptcy expert supporter but rather a guy named Jose from Tijuana. What do you think Cadet Bone Spurs would have said then? What do you think his ignorant supporters, like Fox News talk show propagandists, would have said? To give you a clue, look at how the bankruptcy expert and his Fox friends are trying, absurdly even for them, to make a ragtag group of exiles 1000 miles away look like an invading army. And the sad thing is that a big part of this base believe it or at least want to believe it because they’re as sick and hateful as their dear leader. Basically, the bankruptcy expert has shown that he’s much more saddened by losing a campaign talking point than the collateral damage that lay at his feet. Tomorrow he’s off to his vitriolic ways with calling our free press the enemy of the people and by trying to be anti-Constitution. i.e. Now Cadet Bone Spurs wants to deny citizenship to some of those born here, as guaranteed by….the Constitution!

Oh, well. What’s a little tyranny when we’re getting our tax breaks and cracking down on those who don’t look like us and yet seem to still be called Americans? Thankfully, in less than a week, the mid-term elections will be over. Sadly there will be not be a total repudiation of the bankruptcy expert. But there will likely be some. In 2020, we will need so much more.