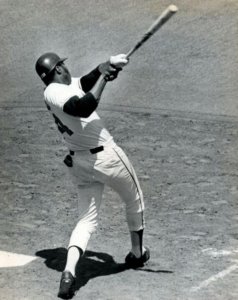 In my earliest days as a baseball fan in Chicago, I watched hundreds of games on WGN Television, which was initially the flagship station of both the White Sox and the Cubs. In 1968, the White Sox departed for what was then an obscure UHF station and thus the singular and iconic history of the Cubs on”Channel 9″ began. For me, someone who had become solely a Sox fan — you can’t be a fan of both teams; it just doesn’t fit into the universe — I would watch Cub games, and take in a few games in person at Wrigley, to root for anyone the Cubs were playing against. In a short time, the San Francisco Giants became my favorite National League team. They played in this other-worldly and ever-windy park called Candlestick. More importantly, the Giants had….Willie Mays, arguably the most exciting player in the history of the game. Juan Marichal, the future Hall of Fame pitcher who would kick his leg clear into the sky before delivering an almost impossible pitch to hit. And then there was the quiet, unassuming star, a tremendous player and person who played in the shadows of Mays and Marichal: Mobile, Alabama native, Willie McCovey.

I remember the first time I saw him play, all 6-feet, four-inches of him at Wrigley Field. He seemed like a man among boys, towering over Cubs catcher Randy Hundley, and swinging the bat as if it were made of Balsa wood. I also remember tucking away somewhere the information that he was a Black player who was from Alabama. I’m sure this was because it was the late ’60s and Dad and my older sisters had made me acutely aware of just how difficult it was to be Black in America. And sports seemed to provide an avenue for Blacks that could transcend the bias and racism. Of course, much of this was folly and naive on my part. But there was also an appreciation and a curiosity of that world in Alabama in which so many great Black players first cut their teeth.

So as I heard the news this week of the great Willie McCovey passing away, I revisited my curiosity of Alabama as a young baseball fan, specifically the hometown of Mr. McCovey: Mobile, the birthplace of over three dozen Major League Baseball players. Born there  were some really good players such as Juan Pierre and Amos Otis. But then (Oh, my!) there is that other list of players from Mobile: Ozzie Smith. Satchel Paige. And Henry Aaron. Most fitting company for big number 44. Rest in peace, Willie.