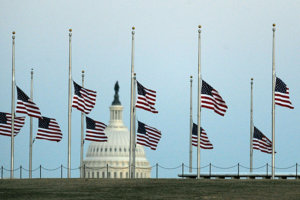 It has happened. Again. This time the mass shooting was at a country music bar in Thousand Oaks, California and left twelve dead including a 29-year veteran sheriff’s sergeant, Ron Helus, who was doing his job as one of the first law enforcement officials to arrive upon the scene. Mass shootings before this have included a nightclub in Orlando popular with the gay and lesbian communities, another country music gathering in Las Vegas, a Black Baptist Church in Charleston, an elementary school in Connecticut, a high school in Florida, a college in Virginia, a military base in Texas, so last week’s news —  a synagogue in Pittsburgh and the list goes on and on and on. The inevitable “next one” could be anywhere. We’re a country filled with millions and millions of soft targets and more guns than there are people. Comforting thought as deranged minds find companionship and reinforcement online for their sickness.

Personally, I hate guns. What’s to like about something that was made solely to kill? And though I have friends who love to do this, I still find it difficult to understand the desensitization that must take place within them when hunting. Then again, I eat meat and fish, so these friends are likely just more emotionally honest than I am. Either way, no matter what I may or may not feel about guns, it certainly seems that we’re still a country obsessed with them and the overwhelming majority of gun owners never ever use them in any threatening manner. So as much as I’m all for common sense gun control laws, such as background checks for owners and the outright banning of automatic and semi-automatic weapons, these laws will not prevent all mass shootings. But NRA extremists should never be able to use this as an argument, specious to the hilt, against all gun control laws. Still, real change, if it is ever to come, will take so much more time and effort.

It may begin with something as simple as promoting good works and kindness. Nothing against the military, but why do so many sporting events begin with weapons of mass destruction flying overhead as symbolizing America? Why don’t we honor national disaster first responders and teachers and nurses and other caregivers in front of crowds at stadiums and arenas? Why is there such acceptance of politicians who use hate and derision to polarize us instead of supporting those with uplifting words to unite us? Why can’t we be adults and get over ourselves, knowing that’s exactly what our children need? Why do we accept such trash in movies and so-called comedy which cheapens and demeans humanity? Where is the social responsibility of the Hollywoods and Netflixes and Googles of the world? All of this is not a left-right issue. It is a human issue. We either believe in the sacredness of life on all levels, in all people, or we don’t. There is no gray area.