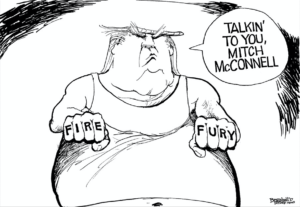 Though I didn’t expect it intellectually, I was still hoping Americans would come through and provide a Democrat-majority Senate, as they did the House. I was hoping for this because there is no way to separate the anti-Americanism of the bankruptcy expert and his Republican enablers in office. In the height of cynicism and lack of regard for American principles, small men like Mitch McConnell and Lindsay Graham have not only not stood up to the bankruptcy expert, they have protected and promoted him. In addition, we have a GOP that has openly racist politicians. Think: the birtherism dog whistles by Cadet Bone Spurs himself and the openly racist Iowa Congressmen Steve King, to pick just two of low hanging racist fruit.

Less than 24 hours after the election, the racist cadet also assailed the free press by barring a reporter from ever directly asking him a question and replaced the attorney general he just fired with a loyalist political hack. Look out, Mr. Mueller. And look out, America. If we weren’t before, we are on the precipice of civil mayhem. And the blame for this is squarely on Republicans. They either don’t have a problem with attacks on the free press and the judicial system or racists being asked to join their forces (bottom line: bankruptcy expert and many current Republican politicians would not be in office without the racist vote — think Kentucky, Florida, Georgia, Iowa, even Minnesota where a (vanquished) Senate candidate compared Michelle Obama to a chimp) or are too ignorant or complacent to accept that this is how their party acts and remains in office.  You simply can’t abhor this behavior and then go vote for a Republican.

It is also glaringly apparent how the thousands of lies spewed by the bankruptcy expert have all been made to benefit himself, not the country and the institutions that safeguard all of our freedoms. In an amazing lack of perception, people voting Republican just don’t grasp that. How many times are we going to hear from this group of voters that they don’t agree with the cadet’s racism or separating children from their families or trying to use the military to score political points or his trying to use the justice system as his own fiefdom or his promoting the intimidation of the free press or trying to kill the ACA’s insurance coverage for those with preexisting conditions? I mean, what else is there?