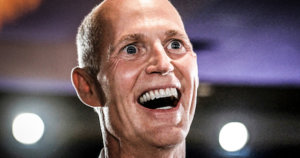 Every accountable and credible media outlet, including the Wall Street Journal, has called out Republican Governor Rick Scott for lying about voter fraud in the Florida Senate race in which he’s pitted against incumbent Democrat Senator Bill Nelson. As the counting continued, Scott’s relatively small lead over over Nelson, about 56,000, shrunk to an infinitesimal one: less than 12,600 votes, or .15%. In Florida, an automatic recount kicks in when the margin is less than .5%. So let the recount begin! But if you’re Scott, you choose to follow the bankruptcy expert’s lead and make up a total lie and hope the people don’t know how to read. In this case, Scott has stated there is “rampant fraud” being perpetrated by the Democrats. No. There. Is. Not. And that’s according to the Secretary of State and Scott’s own monitors.

It should come as no surprise that Scott would stoop so low as to throw the entire free election process under the bus in quest for more power and riches. He was the guy in charge when Columbia/HCA committed fraud resulting in the largest fine ever levied by the federal government regarding Medicare: get this….$1.7 billion! In a related deposition, ever forthright Scott pleaded the fifth 75 times. Good to see he had nothing to hide, don’t you think?

Meanwhile, about half of Florida voters didn’t seem overly influenced by what would normally be a disqualifying past of being linked to what truly was rampant fraud, not the made-up kind Scott now so petulantly throws around today. Do Scott and bankruptcy expert supporters know how to say, “Lock him up!”?  I also wonder if Scott’s words claiming rampant fraud were so directly aimed at Bill Nelson, if the latter has a legitimate case of slander against the former? Now, that would be a fun trial to attend. Whatever the case, the Florida recount continues on. As it should, Scott’s blatant lies notwithstanding.