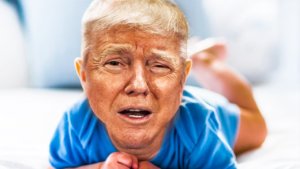 I don’t know if it’s just my perception, but I’m beginning to think that more and more people have lost the energy for outrage and are simply tuning out the bankruptcy expert. Ironically, this lack of new outrage is actually a much more potent counterforce than outrage. This is because the bankruptcy expert is fueled by people being offended; it provides an enemy to rally his ever-diminishing troops. But if people are beyond being offended, there is no energy provided the bankruptcy expert.  As I’ve termed him before, the petulant child keeps stomping his feet, demanding attention, face turning ever redder. But the adults in the room have turned a deaf ear to the voice that has spewed literally thousands of lies. It’s actually pitiful to watch this guy incessantly pout.

In fairness, it’s not just the lies that have pushed people away from the bankruptcy expert; it’s also the fact that his administration is close to a total failure. As Paul Krugman wrote today in the New York Times, its one “achievement” of a massive cash giveaway — er, tax cut — to corporations and the 1% has done nothing to help anyone else. Worse yet, the sugar high has already worn off. Real estate and the stock markets seem to have plateaued, there has been no great increase in corporate investment (surprise, surprise!), wages are stagnant for the majority of Americans and the country’s debt has skyrocketed. In case you doubt my characterization of the tax cut as a failure, remember that Republicans ran away from it in the past election. Obviously not far enough away for GOP House members.

Beyond the failure of the bankruptcy expert’s crowning achievement tax cut, he has been duped by the dictators of North Korea, Russia and Saudi Arabia and he has alienated our greatest (and freedom and democracy-supporting) allies. He has been tone-deaf, possibly by design, to the real cancer of white murderous violence. Somehow he sees the extreme weather pounding the world and yet has absolutely no intellectual curiosity — that human beings may have a role, both in the creation of extreme weather as well as its possible abatement. Lastly, his choices in staff and officials, which were sub-par in the beginning, have crashed and burned even further with each passing day. We’re pretty much down to the “D” list and it reminds us of just how important career government workers are. Competency matters.

So for the next two years we’ll have to keep our fingers crossed that the worst administration ever assembled will not damage the core DNA of, yes, an imperfect democratic republic, but still a democratic republic nonetheless. And we’ll do this, in part, by not reacting to all the foolishness, ignorance and hate in the ongoing slush of words uttered by the bankruptcy expert.