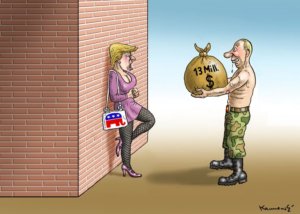 And so it is, our country’s most astute — the CIA, the good guys protecting us from our adversaries and enemies, have concluded, as have all others with a brain beyond that of a gnat, that the Saudi dictator MBS ordered moderate journalist Jamal Khashoggi to be killed. As I hate to be graphic, in this case it illustrates the total animals that rule Saudi Arabia. Khashoggi was lured into the Saudi embassy in Turkey where he was promptly killed by strangulation and sawed into little pieces, which were then placed in acid to dissolve. The bankruptcy expert’s response? Saudi Arabia gives us money so our American principles mean absolutely nothing. In short, what do we call this, this exchanging virtue and principle for money? It’s called prostituting oneself.

Each passing day one thinks it can’t get any worse, that we’ve seen it all. But today is a new day and yet another rebuke form the so-called commander in chief of the men and women who have sworn public service to our country, the CIA. (Over the weekend the bankruptcy expert went after the American hero who masterminded the take-down of Osama bin Laden.) And still, little Marco, little Lindsey, macho Mitchey do not condemn this tyrant trying his best to tear our country and its principles apart.

I remember after 9-11 the phrase, “we will not forget” became popular, though what in the hell that meant is beyond me. I mean, the people who perpetrated 9-11, hated us. Most of them were Saudis, the same group the bankruptcy expert embraces today because they buy stuff from us and because he likes their oil. Make no mistake. There is pure equivalency in the immorality of the 9-11 attack and the murder of Khashoggi. It comes from the same place: Total and absolute intolerance acted out with unbridled violence to eradicate anyone who does not agree with you. And this is what the Republicans are complicit in as they, yet again, sit on the sidelines as their dear leader shreds common decency. So, to them and to the bankruptcy expert let me just say, we will never forget.