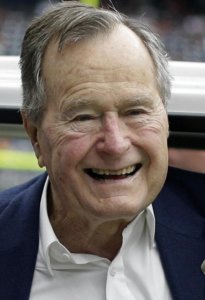 George H. W. Bush, “41”, after an incredible 94 years of life, has passed away. It is more than safe to say we will never see his like ever again. He was arguably the most well qualified president, having been a congressman, the United States ambassador to the United Nations and head of the CIA. But even before his entry into politics, at the ripe old age of 18, he skipped going to Yale and instead became a pilot in World War II. It was a different era back then, when the murderous Hitler threatened to overtake the world and this most vile of individuals, ironically, unleashed some of the very best in the DNA of America. Humility, community, self-sacrifice for the greater good. And George H. W. Bush was emblematic of this age and it never left his soul.

He was a limited politician because he couldn’t bring himself to self-promote…a world away from today’s faux “greatest”. He also almost always ended up doing the right thing even when it would cost him politically. No better example of this was reneging on his “No new taxes” mantra. Well into his first and only term as president, he realized that the country indeed needed new revenue and that it had to come from taxes. This not only played a major role in losing his bid for reelection — Clinton’s “It’s the economy, stupid” — it also launched the nightmare known as Newt Gingrich, an empty, hypocritical soul that has proved over and over again he cares about little more than his own self interest..the anti-Bush, if you will, and the first big step to the Tea Party, culminating in the total disaster today that is the bankruptcy expert. So Bill Clinton beats George H. W. Bush in 1992 and almost before the latter has moved to the White House, the economy is poised to come roaring back.

But beyond this usually unheralded economic success of 41, was his almost other-worldly and sage wise handling of international diplomacy. With courage of a combat pilot, he knew the horrors of war and was in no great rush to militarily engage. That said, he also was likely the most skilled leader in history when putting together a wide ranging coalition of countries in successfully freeing Kuwait from the overreaching Saddam Hussein. And though criticized by many at the time, Bush chose not to topple Hussein. He knew there was no end game to this move and wisely stuck to the parameters of all coalition members.

But if there is one thing that stands out above all others about George H. W. Bush and his expertise and humanity in diplomacy it was when the Berlin Wall came down. He was criticized for not traveling there to join in the celebration, to take a victory lap. But his handling of this and the post-Cold War was nothing short of both brilliant and kind. He realized the ending of the Cold War left some vanquished parties and that these parties didn’t need a deeper defeat; they needed empathy and a path forward, not unlike what materialized after World War II with countries that had been our enemies.

Bush was not a perfect man, something he had always been the first to admit. Likely his biggest mistake was one that thankfully never blew up on the country — his selection of Dan Quayle as vice president. Quayle was untested, unseasoned and possibly intellectually-challenged, not the person who should be a heartbeat away from the nuclear codes. But the country, yours truly included, should have been wiser and more mature when this good man, Mr. Bush, ran for reelection in 1992. Instead, we went for the “I feel your pain”, lower lip-biting, flavor-of-the-month candidate. But as was 41’s trademark, he accepted what had to be a bitter defeat by a lesser rival with total class.

I wanted to wrap up this column with one of my favorite moments in American politics. Total lack of pretense, kindness, and great humor. May George H. W. Bush rest in peace.

One Response to “Simply put, with grace and humility, he made the world a better place”