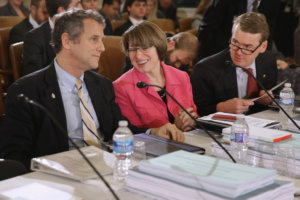 Massachusetts Governor Deval Patrick announced earlier this week that he would not run for president. It seems he thinks the process is cruel, which places an exclamation point on stating the obvious. Also from Massachusetts, Senator Elizabeth Warren, whose mistaken and strange obsession with branding her genealogy with a trace of Native American blood, is history (and probably always has been) but is in serious denial. And there is another president wannabe California Senator Kamala Harris, whom the far left loves and the rest of the country not so much, who likely kissed her presidential aspirations good-bye when a senior aide resigned Wednesday. Why the resignation? It was reported that the senior aide, Larry Wallace, was accused of sexual harassment and had the state cough up $400,000 to settle the lawsuit. Harris claims to have not known anything about her senior aide’s sexual harassment, which means at least one of these following two conclusions are facts: One, she’s ignorant and therefore woefully inadequate as an executive administrator by being so oblivious to the  potential criminal conduct of her senior aide. Two, she’s a blatant liar saying she knew nothing about the sexual harassment charges. So long, Kamala.

But still standing, and rather proudly and respectfully so, is Minnesota Senator Amy Klobuchar. She is exactly what the country needs and, I think, wants. Some of the crazies in the Democrat Party on the far left want to match the insanity on the right. All this would do is further polarize the country. Americans in the middle and on the right, especially working class, deserve to not only be heard, they need to be genuinely respected. If you’re living in rural America or other parts of the country where capitalism has left you behind and scarred, as corporate America and the wealthy continue to carve out more and more of the economic pie, you deserve not so much relief as much as simply your fair share. Klobuchar gets that, as her party in Minnesota is not the Democrat Party; it is the Democratic-Farmer–Labor Party.

Klobuchar is considered the most bipartisan of senators, respected on both sides of the aisle. But her reasonable, genial manner is undergirded by a steel resolve and toughness, as evidenced by her years as Hennepin County Attorney, making her responsible for all criminal prosecutions in Minneapolis. It also doesn’t hurt that Klobuchar’s impressive resume is bolstered by a genuine and unpretentious manner that has led to lopsided victories in her races for Senate. In this year’s race, her opponent received only about a third of the vote.

If the Democrats are smart — quit laughing! — Amy Klobucar would be their nominee. But who would be her running mate? One might want to consider a fellow senator who won convincingly in a state that went for the bankruptcy expert in 2016 and a state that is always pivotal in winning the White House: O. H. I. O. and Sherrod Brown.