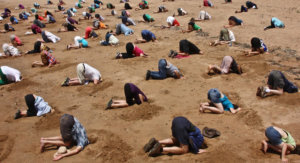 Just yesterday the bankruptcy expert’s former personal lawyer, Michael Cohen, was sentenced to three years in prison. Cohen has said he will continue to cooperate with prosecutors.

Paul Manafort, the bankruptcy expert’s campaign chairman for part of 2016, had been convicted earlier of eight financial crimes and then seemingly made the unwise move to continue lying to prosecutors. They just don’t like that. Manafort will be sentenced in late January.

Michel Flynn, former national security advisor, was found guilty of lying to the FBI. But, unlike Manafort, Flynn has found religion and is playing nice with prosecutors.

George Papadopoulos, a member of the foreign policy advisory panel for the 2016 campaign, has just concluded serving a short prison stint for lying to the FBI.

And the above is but a partial list of the sterling group of individuals the bankruptcy expert has assembled who have become convicted felons. Meanwhile, individuals who were once supporters and enablers of the petulant child, from media spinners to tax spinners, have turned.

If this weren’t enough to signal doom, one need only take a look at the revolving door of administration officials. The latest departure will be that of White House Chief of Staff John Kelly, leaving by the end of the year. Of course, there’s only one small detail that was overlooked by the the occupant of the White House: the guy he tapped to take over, Nick Ayers — VP Mike Pence’s chief of staff, even with his mammoth ego and ambition, said…I don’t think so, want to spend more time with my family. Yep.

But Kelly is just the latest to leave; there were dozens before and there likely will be dozens more once he’s gone. And the familiar refrain upon their leaving are usually words of disparagement from their former boss. One example would be ex-Secretary of State Rex Tillerson, who turned out to be as “dumb as rocks” and “lazy”. Ouch!

Since this White House began with a C-level team in the first place, one can only imagine the type of creature who would take a job in this administration now. If you think I’m exaggerating, just consider that even man’s best friend is staying away from 1600 Pennsylvania Avenue. But there is word on the street that a former spokesperson of another tyrant is looking for work…..