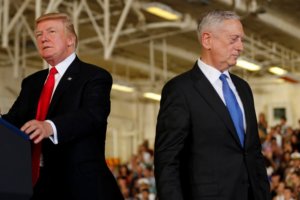 It was fascinating to watch the story unfold yesterday of Defense Secretary Jim Mattis announcing that he’ll be exiting his post by early next year. The bankruptcy expert, age 72, classless as ever, tried to spin it as a retirement on Mattis’s part. It. Was. Not. Mattis, 68, in pretty much a total rebuke of the ever-myopic, petulant child, resigned in protest over an incoherent and dangerous foreign policy, the latest folly being a withdrawal from Syria and another withdrawal threatened in Afghanistan. But if there was a silver lining to what’s considered the lone remaining adult in the room leaving this catastrophically failed administration, it is that it finally woke up the Republicans on Capitol Hill.

It’s essential that the United States maintain and strengthen the post-World War II alliances that have been carefully built by leaders in both parties. We must also maintain a cleareyed understanding of our friends and foes, and recognize that nations like Russia are among the latter.

So I was sorry to learn that Secretary Mattis, who shares those clear principles, will soon depart the administration. But I am particularly distressed that he is resigning due to sharp differences with the president on these and other key aspects of America’s global leadership.

It is abundantly clear that we are headed towards a series of grave policy errors which will endanger our nation, damage our alliances & empower our adversaries.

If we continue on our present course, we are setting in motion the loss of all our gains and paving the way toward a second 9/11.

As one can easily quarrel with the absurdity of building a multi-billion dollar wall or with the mean-spiritedness of the bankruptcy expert trying to slash food stamps from some of the neediest among us — a savings of about $1 billion per year after a cash giveaway of hundreds of billions of dollars to corporations and the wealthiest among us — the departure of Mattis is downright frightening, even to the staunchest enablers of the current occupant of the White House. These enablers helped create the monster. Let’s hope they have an idea on how to now combat him.