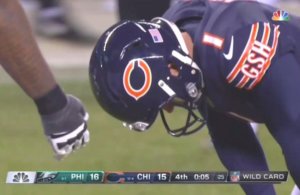 By now just about everyone in the world knows that Cody Parkey missed a last-second field goal that would have sent his Chicago Bears on in the NFL playoffs to meet the Los Angeles Rams. Parkey’s miss was excruciating to watch in that it was yet another one of his kicks this season that hit the upright. But adding insult to injury, it then hit the crossbar and almost looked like it was going to be good. Only it wasn’t. But what followed is truly more important and timeless than any made field goal would have been. Parkey, as he does when he makes field goals, looked up and gestured to the sky to honor his God. Parkey then went on to shake the hands of various coaches and players of the Philadelphia Eagles. Later, in the locker room, with openness and sincerity, he fielded the many questions put forth by the media. Cody Parkey proved himself to be a total class act, one borne of principles and perspective.

Contrast this with the type of Neanderthal who call themselves football fans even though they devolved into boos and profanity aimed at their gentleman kicker. I realize all sports have some fans who are idiots; it’s just that idiotic football fans seem to be the most mean spirited. Their strange shallow and misplaced machismo would be laughable if it wasn’t so pitiful. What type of awful human being found it natural to spew hatred at Parkey instead of compassion?

Thankfully there were scores of others who naturally took the high road, from his teammates to other athletes in other sports. One such example was Chicago native, Bears fan and NBA great Dwayne Wade.

Most of you have no idea how hard this is to do. Cody Parkey way to face the media like a true professional. I’m a fan!