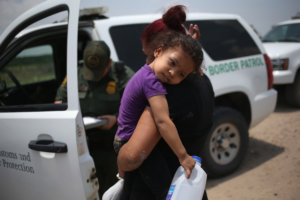 From the Wall Street Journal late last night, as its journalists laid out facts:

CRIME CONCLUSIONS: The National Academy of Sciences examined numerous academic studies on crime rates by immigrants and concluded they are less likely than the native-born population to commit crimes. It also concluded that neighborhoods with greater concentrations of immigrants have lower rates of crime and violence than comparable nonimmigrant neighborhoods. The study didn’t examine crime rates specifically among undocumented immigrants. Overall, crime rates fell in the U.S. as the size of the unauthorized immigrant population rose in the past two decades.

The above is the reality, as is the fact that immigration from Mexico has decreased as that from Asia continues to increase. In short, as was true with his specious, racist and xenophobic rants about birtherism, the bankruptcy expert lies to inflame those individuals who arguably either are incapable of discerning fact from fiction or are so filled with fear and venom for those not like themselves that the truth just doesn’t matter. Thankfully, the number of people who fall into both these categories is diminishing. But it’s still pretty scary to fully comprehend that a third of Americans are still in his lying, anti-American camp. What’s also pretty scary is that many Democrats, especially some of the newly-elected ones like Michigan Congresswoman Rashida Tlaib, are proving to have some of the same scorched-earth tactics as the bankruptcy expert. When you lower yourself to that level, there are no winners. On the contrary, if there was ever a time we need an individual who will lead by uniting, that time is now.

With malice toward none, with charity for all, with firmness in the right as God gives us to see the right, let us strive on to finish the work we are in, to bind up the nation’s wounds.