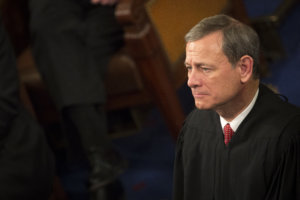 Throughout these past two years, especially now when his administration has imploded with “D”-listers taking over from either convicted felons or the rare talented, ethical and patriotic souls who left in bitter disgust, so many have tried to call out the cancer that is the bankruptcy expert. But a third of Americans don’t want to listen. Maybe today’s column by Tom Friedman of The New York Times should be sent to these Americans. Friedman nails the essence and the core of America, including long overdue acknowledgement of an American hero, Chief Justice John Roberts.

From “Trump tries destroy, and Justice Roberts tries to save, what makes America great,” by Tom Friedman.

For me, the most disturbing thing about the Trump presidency is the way each week, like a
steady drip of acid, Donald Trump tries to erode the thing that truly makes us great as a country
and the envy of so many around the world — the independence and nonpartisan character of our
courts, our military, our F.B.I., our Border Patrol and our whole federal bureaucracy.
No modern president has been more willing to use U.S. service members or border police as
props for his politics, to blithely declare without evidence that most of the 800,000 federal workers
going unpaid during the government shutdown are Democrats, to refer to the Pentagon
leadership as “my generals” and “my military,” and to denounce different federal judges who
have ruled against him as a “so-called judge,” an “Obama judge” and a “Mexican” judge (even
though he was born in Indiana).

Why is this so important? Because America’s core governing institutions were not built to be
“conservative” or “liberal.” They were built to take our deepest values and our highest ideals and
animate them, promote them and protect them — to bring them to life and to scale them. They are
the continuity that binds one generation of Americans to the next and the beacon for how we
work together to build an ever more perfect union.

At their best, these institutions have created the regulatory foundations and legal and security
frameworks that have made America great — that have enabled innovation to be sparked,
commerce to flourish and ideas to freely blossom. Rather than serving any party or person’s
whims, these institutions have promoted and protected enduring American values, laws, norms
and ideals.

The independent, nonpartisan quality of our institutions is one of the biggest reasons so many
people want to immigrate to America and why some people are even ready to build rafts out of
milk cartons to get here.So when an American leader denigrates those institutions, tries to erode their independence or turns them into political props, he damages the very core of what makes our country unique.And that’s why today I would like to give a shout-out to Supreme Court Chief Justice John
Roberts for having the integrity and courage to call Trump out for this behavior, to draw a red line
around the judicial branch and to signal to Trump — politely but firmly — to keep his hands off its
independence and nonpartisan charter.

Roberts did so in November, after a federal district judge in San Francisco put Trump’s asylum
policy on hold and the president denounced him as an “Obama judge.” Responding to a query made by The Associated Press, Chief Justice Roberts said: “We do not have Obama judges or Trump judges, Bush judges or Clinton judges. What we have is an extraordinary group of dedicated judges doing their level best to do equal right to those appearing before them.” Roberts added, on that day before Thanksgiving, that an “independent judiciary is something we
should all be thankful for.”

That brushback pitch by Roberts — a high fastball right under Trump’s chin — was highly
unusual, but an important example to others. Of course, our judges are appointed by politicians
with the hope that they’ll reflect their own or their party’s ideological bent on issues that come
before them — and they often do. Roberts knows that. But what he also knows is that central to our system is that every Americanis able to expect an impartial hearing before those judges, who, once they assume their place on the bench, should be loyal only to the Constitution and their interpretations of it.

It was Roberts, appointed by George W. Bush, who cast the deciding vote to save Obamacare in
June 2015. Other times he’s disappointed liberals and will surely do so again. Judges judge.
But Roberts understood that to maintain the power and legitimacy of his court, he had to defend
the principle of judicial independence and the presumption of nonpartisanship from Trump’s
assaults — and he did.

It was not easy. Because Roberts had to protect his branch of government and keep it elevated,
without getting embroiled in some Twitter spat with a president who will throw mud at anyone
and who respects no institutional red lines or nonpartisanship. The chief justice pulled it off.
What a contrast with the silence of the lambs — how Senate Majority Leader Mitch McConnell
and House Speaker Paul Ryan bent their institution, their branch of government, to Trump’s will.

I’ve spent four decades reporting from countries with weak institutions — like Russia, China,
every Arab state, Turkey, Iran, Venezuela — where the arbitrary whims of the leader or his party
are the basis of all decision-making, not the rule of law, built on independent institutions.
But Trump appreciates none of this. It would be easy to attribute it all to malevolence. But I think
a lot of it is sheer ignorance. I don’t think Trump ever took civics. I don’t think he ever understood
the separation of powers or the meaning of independent agencies. That’s why the shutdown
doesn’t bother him. His instincts are those of a banana republic dictator. That’s also why Trump is so comfortable with the likes of Vladimir Putin and so willing to damage the thing that makes America most special. And that’s why I so appreciate Roberts’s quiet pushback so much.

Here is the entire column by Tom Friedman.