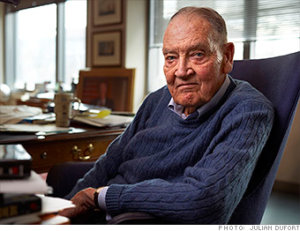 Jack Bogle, founder of Vanguard, died today at the age of 89. Bogle, with his profound and yet simple approach to investing, changed the world for the better by democratizing the markets. He did this with a concept called indexing, which now is the single greatest driver of the market. But decades ago, when Bogle conceptualized and introduced indexing, he was ridiculed.

Back in the day, Wall Streeters tried to keep the markets mysterious, something mere mortals could never master. Instead, we needed managers to invest our money. They charged just 2% or 3% to take our money and buy securities that sometimes made money and sometimes didn’t. But no matter what happened these folks still took home their 2% to 3%. And most of us ignorant followers thought that was a bargain. We never figured that over a period of ten or twenty years how these fees were decimating our return on investment.

Into this patently unfair environment Bogle steps in and formulates a mutual fund that is passive, that is not actively managed. Rather, it mirrors the market, the most popular in time being the S & P 500 index fund. And this is when we discover two amazing things. First, we discover that passive funds’ returns absolutely crush actively managed ones. Second, we discover that passive funds charge less than a tenth of what actively managed funds charge. So figure it out: Bogle had created a mutual fund that outperformed others and at a fraction of the cost. It was not a gimmick, a success one year and gone the next. It was brilliant and has lasted decade after decade.

It was always a joy to listen to the clear-thinking, no-frills Bogle speak. He knew early on most of what goes on in the markets is a lot of noise, not unlike touts at a racetrack. Into this cacophony he entered with a simple premise: He believed in the overall progression of the markets through history but also knew it would be impossible to time each fluctuation. And he provided an incredibly inexpensive way for us to participate in this great creator of wealth. Warren Buffet said it best when he said that Jack Bogle did more for the individual investor than anyone he’s ever known.

Thank you, Jack. Rest in peace.