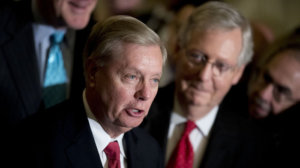 The latest column by conservative columnist George Will asks the question why people like Lindsey Graham come to Congress. The backdrop for this question is a surreal devolution of the senator from South Carolina. In simplest terms, he went from John McCain’s wingman, emphatically denouncing the bankruptcy expert, to a full-throated supporter in what seems like a blink of an eye.

Unless Graham is literally schizophrenic, his change of course has to be the coldest of cynical political calculation: one doesn’t get elected to a statewide seat in South Carolina without paying homage to the bankruptcy expert. Graham is so self-defined by his office, and all its trappings, he has been just fine with this Faustian deal. And thus answers the question why people like Graham come to Congress. They are driven by having their self-absorbed appetites sated. When McCain was around, Graham could achieve this within the parameters of decency and an ethical foundation. But once this was no longer possible — Senator Graham, we all knew John McCain. You’re no John McCain — he transferred his wingman role from McCain to the bankruptcy expert. And this really tells you everything about what’s at the core of Lindsey Graham.

Meanwhile, his co-enabler, Mitch McConnell, should be given some credit for at least never acting as if  he was aspiring to any great principles in his quest for power. He just always wanted to be the majority leader and said as much. If ever there has been an empty vessel of a politician, McConnell is it. He dog-whistled the racist bloc when Obama was elected. He put an exclamation point on just how phony his party’s concerns about the deficit are by ramming through the largest cash giveaway in the history of the country to the richest of the rich and fat corporations. And today he is trying to put forth xenophobic legislation straight from the bankruptcy expert. Like Lindsey Graham, McConnell’s driving motivation is to keep his day job. Sad, very sad.