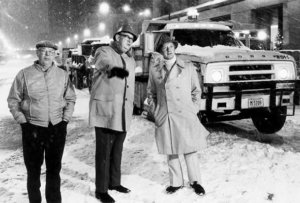 Back in 1979 when the antithesis of charisma and capability, Michael Bilandic, was mayor of Chicago, a massive snowfall hit, a blizzard befitting of the Windy City. This should not have caught anyone off-guard. But somehow, for Bilandic, it did. For what seemed like forever, the streets didn’t get plowed. Enter the feisty, chain-smoking Jane Byrne, who rode Bilandic’s failed plowing of the streets all the way to the biggest upset in Chicago mayoral politics.

This story came to mind as I read comments by federal employees in regard to the government shutdown. The one statement that summarized the situation most succinctly was, “Our country is being run by children.”

It’s telling that a big portion of the electorate has been willing to look the other way as the bankruptcy expert violates at least the spirit of American ideals, if not the actual law. But when their daily lives become negatively impacted, all bets are off. You didn’t plow my streets, Mr. Bankruptcy Expert! The one unpardonable sin.

Even his most ardent supporters saw just how incompetent he was. For a guy who has endlessly claimed what a great negotiator he is, his government shutdown essentially killed whatever remained of this brand. Former New York City Mayor Michael Bloomberg, who certainly seems like he’s running for the president, called the shutdown a “cynical political stunt“. Others simply call it a complete and utter failure.

I also call it a huge gift to the country. One can try and spin “fake news” when your followers don’t know any better. But when they actually and directly experience real news and it ain’t good, well, the bankruptcy expert is thus exposed for the ignorant fool that he is. So the Michael Bilandic of our times (with my apology to the memory of the late mayor) will no doubt suffer the same fate of the former Chicago mayor come 2020.