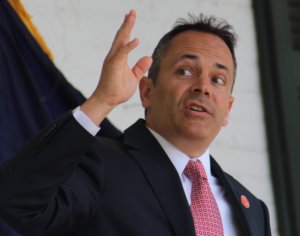 The Bluegrass State has a lot going for it, most notably its Thoroughbreds and the idyllic farms they inhabit. But one thing Kentucky does not have going for it is its stable of Republican politicians. First, there is the nut job conspiracy theorist junior senator, in the person of Rand Paul, sired by the definitive nut job conspiracy theorist, in the person of Ron Paul, who is still predicting the Apocalypse.

Then, of course, there is Mitchey, whose sole aspiration in life was to become majority leader. Mitch McConnell attained this lofty honor and has tirelessly used this post to, well, maintain that post. To do so, he has dog whistled to racists when America elected its first black president, has blocked the legitimate nominating process for a Supreme Court justice and has been the essential enabler for the bankruptcy expert to continue his desecration of American principles.

But quite possibly the governor of Kentucky, Matt Bevin, is the ultimate example of the state’s GOP. One time he had to apologize for his comments that children were sexually assaulted, exposed to drugs, ingested poison and physically hurt because teachers were protesting in Frankfort, the capital, instead of in school. Another time he spoke at a pro-cockfighting rally. Really. You can’t make this stuff up. He later came out with a bold and visionary statement (for 1819) that he was against cockfighting. One wonders, though, when being not the first nor the second but the third speaker at said rally, how Mr. Bevin hadn’t figured out exactly what type of rally he was attending. Oh, well.

And then yesterday, as officials at various school districts in Kentucky announced closing school for today due to expected -15 wind chill, crazy cousin Matt criticized the closings and complained that we’re all getting soft, I tell you. So much for little Johnny waiting for the school bus in temperatures that would cause frostbite within minutes.

Anyway, life goes on in Kentucky politics. Bevin’s unfavorable ratings have reached close to 60% at times. But the state’s Democrat Party is in such disarray that Bevin might still get reelected this November, if he can escape the primaries intact. If so, Kentucky will still have its Republican trifecta of Paul, McConnell and Bevin.