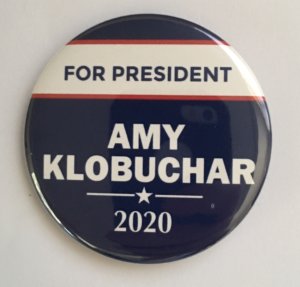 Back in October, I wrote of the country’s need for Minnesota Senator Amy Klobuchar to become the next President of the United States. Then, in November, columnist Ross Douthat of the New York Times wrote: If I were a shadowy Dem power broker, I would want to boost Amy Klobuchar, whom everyone seems to like and whose showing in a purplish Upper Midwest state was extremely impressive. She needs a way into the spotlight, but she’s the Dem I would least want to face if I were Trump.

Now, the daughter of a newspaper columnist and the former prosecuting attorney for Hennepin County (Minneapolis), Senator Klobuchar, has just received dual coverage as a serious presidential contender. It is not surprising that she should receive such coverage from the preeminent media outlet in the state, the StarTribune. But the senior senator from the state of 10,000 lakes — actually, to be accurate, over 12,000 lakes — also made the home page of The Washington Post with a strong and respectful boost from columnist George Will.

From essentially the beginning of the ugly surreal odyssey of the past two years in Washington, Will has been an outspoken and eviscerating critic of the bankruptcy expert, while maintaining his ability to understand and appreciate the principles of those with whom he disagrees philosophically. Such was the case with his piece on Ohio Senator Sherrod Brown. Why is this important? Because, as perplexing as it is, the fact is the vast majority of Republicans still back the bankruptcy expert, so the 2020 election will be decided by the independent voter. This makes the commendation by Will meaningful to Klobuchar. It adds credibility to a member of the Democrat Party, a party that has challenges being serious about real answers beyond the hyped, fact-starved rhetoric. Maybe intelligence and civility and an open mind will again matter come 2020. If so, the country will have President Amy Klobuchar.