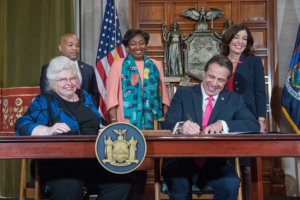 Within the past month, Democrats of five states have moved forward in liberalizing abortion laws. The most surreal had to be the smiling group, headed by Governor Andrew Cuomo, in New York, as he signed the bill into law. I mean, what in the world are they smiling about? Are they celebrating the 40% abortion rate in New York City? Are they celebrating that an all-powerful group of human beings can now be even freer to kill unborn children?

Some facts and observations about this tragic desensitization to the sanctity of human life and willful ignorance and obfuscation.

First, some proponents argue that late-term abortions are rare, as if limited killing of the powerless isn’t so bad. Using this absurd rationale, one would also rationalize away school shootings and other tragic taking of life because, after all, they’re rare. But even if you wanted to take this unbelievably calloused and illogical leap, you’d still be wrong. Why? The Guttmacher Institute, which is about as pro-abortion choice as an organization can be, documented that in 2015 there were over 600,000 abortions and that 1.3% of these were late-term. This means there were about 8,000 late-term abortions that year. Exactly whose definition of rare are we using?

Second, late-term abortion is legal by using the rationale “for the health of a woman”. A lone doctor can decide this and there are no parameters, so one can drive a truck through that wording. It basically is no restriction at all.

Third, another rationale for late-term abortion is fetal abnormality. Again, who decides what degree of fetal abnormality is extreme enough to be aborted and who gets to determine that this is fetal abnormality and not simply human abnormality? Likewise, and more to the point, exactly who put us in the position to decide who lives and who dies? If we allow our society to condone the taking of life, all life is desecrated and demeaned.

Fourth, pro-abortion choice supporters consistently criticize many on the right who are “pro-life” because they don’t want to provide for mothers and children in need. To this, I reply, the pro-abortion choice people are absolutely right. It’s a travesty how little this country provides for families at all stages of life. This being the case, though, has absolutely no bearing on the immorality of taking a life of an unborn child. Again, we’re talking late-term abortion here.

Fifth, why do many pro-abortion choice supporters want to prevent women from seeing sonograms? The answer is glaringly obvious.

Sixth, anyone who has read even a few of my stories knows how I detest the bankruptcy expert and his attack on basic human principles. I disrespect his Republican enablers as well. But what about the anti-Americanism exhibited by the vast majority of Democrats when it comes to other Democrats who are “pro-life”?  If you are pro-life in the Democrat Party, you are roundly castigated, if not condemned. The all but absolute demagoguery on abortion by the Democrat Party is shameful, as are those hypocritical self-professed “pro-life” Democrats that hide behind the separation of church and state in being pro-abortion choice. It’s this simple: They hide from their beliefs because those beliefs might prevent them from being elected. They know their argument of separating church and state is specious. Why are they against the wall and anti-immigration policy? Because it is a moral choice, a choice to protect the value of every human being. That’s also the teaching of the church. When it comes to individual moral choices about one’s life, yes, there has to be a separation of church and state. A case in point would be gay marriage, something between two consenting adults. Too bad if your church is against it. But when one is talking about life and death, that transcends church; it directly speaks to the core American principle of justice for all.

My hope is that the vast majority of Americans, including those who seem to be in the majority in approving of abortion in the first trimester, step back and take a look at how the extreme, radicalized left has tried to place late-term abortion under the pro-abortion choice umbrella, trying to make all abortions qualitatively equal. They are not.