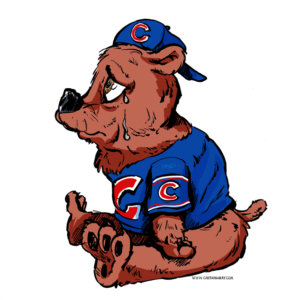 Ok, full disclosure. I am a White Sox fan. It is almost impossible to be a White Sox fan and a Cubs fan. But I actually was happy for my friends who are fans of the north side of Chicago team when their Cubbies finally won a World Series in 2016 after 108 years of futility, unlike the mighty White Sox who won the World Series in 2005 after just 88 years of missing the ultimate winner’s circle. But recently the relatively innocuous “hate” for the Cubs by White Sox fans, and vice versa, has been supplanted by nationwide scrutiny created by the story exposing the racism of Joe Ricketts, the head of the Ricketts family whose fortune financed the purchase of the Cubs in 2009.

The tone-deaf Tom Ricketts, son of Joe Ricketts and chairman of the Cubs, stated, “My father is not involved with the operation of the Chicago Cubs in any way.” Ok, Tommie. You took daddy’s money to buy the team. Exactly what difference does it make that the 77-year-old father decided he didn’t want to be involved in the daily operations of the club? Bottom line: The ownership of the Chicago Cubs is there via money from a racist. Without him and his money, no ownership.

It will be interesting to see if this iconic sports franchise will be negatively impacted. On the local Chicago front, it is doubtful. Chicago remains a city of unofficial segregation. The Cubs play on the north side, which is relatively free from the ongoing violence in the city that largely plagues minority neighborhoods. Likewise, Chicago’s arguably most beautiful downtown in the world, is largely insulated from this violence. Basically, there are two Chicagos. And the one that loves the Cubs inhabit a city that fits them well. There will be no rocking the boat from this group.

Meanwhile, local politicians, whether genuinely or feigned, will criticize Ricketts. But it is difficult to imagine this criticism will have any teeth. The Ricketts may institute some new racial-sensitivity training and donate some money to minority initiatives in an act of contrition. But if any lasting damage will be done it will be via sponsorship dollars leaving. The Cubs derive a healthy portion of their income from sponsors, many of which are publicly-traded, negative-publicity-averse companies. As has happened with a number of television programs on Fox News, the Cubs could lose sponsors trying to avoid the perception of partnering with those whose views are considered xenophobic or racist.  One would like to believe these actions would be taken out of principle. Yep, we sure would.