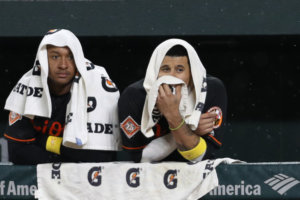 It’s a fundamental fact about how businesses work; they’re cyclical. Think of the meteoric rise of gold decades ago and then its widespread disfavor among investors once the bull market took hold. Think of the dotcom boom….and bust. Or think of everyone in the country jumping into real estate in the early part of the first decade of the new millennium, only to have millions crushed by foreclosures a few short years later. And now Major League Baseball players are experiencing the reality of the marketplace. They’re simply not worth the money they’ve been paid and they aren’t very happy abut this realization. Oh, well.

But Major League Baseball has a much bigger problem than some disgruntled players. Baseball’s biggest problem is tanking, that is, team management opting to field awful teams for years at a time in the quixotic hope it’ll produce championships. What’s lost on these folks is that the essence of baseball’s popularity is based on trying to….win! When this is not the case, when a third of the teams in MLB are not competitive, it taints both the haves and have-nots. It makes you wonder if these recent years will have an asterisk in the record books. *Another year when the champion played against only two-thirds of teams in Major League Baseball whose management was trying to win.

What’s sad about this is that the players, by and large, are still trying to win; they’re just not provided a nucleus that is competitive. But team owners still have lucrative revenue streams no matter how bad their club is, which can act as a disincentive to have any great urgency to improve the roster.

Remember the battle cry of losing teams at the end of the season in baseball’s past: Wait till next year! Now? Not so much.