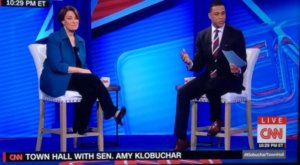 Senator Amy Klobuchar took the stage last night in the key state of New Hampshire for a town hall telecast worldwide on CNN. She hit it out of the park. While unelectable candidates from the coasts — such as senators Elizabeth Warren from Massachusetts, Kirsten Gillibrand from New York and Kamala Harris from California — pander to the latest flavor of the month on the far left, the adult in the room, Amy Klobuchar, speaks the truth, which connected with audience members because of her genuineness and compassion. Both these qualities have produced real results throughout her entire political career in making lives better; a happy warrior she indeed is. What a novel concept when so many politicians are completely immersed in tweeting platitudes that, in the end, are about themselves and not the people and the country they’re supposedly serving.

Last night, Klobuchar said no to free 4-year college tuition, the new green deal and Medicare for all. Instead, she said yes to truly workable solutions for educating all of our youth, major doable fixes for the environment and a comprehensive and expansive approach in improving of our healthcare system by building upon the foundation Barack Obama provided via the Affordable Care Act. In essence, as she has been, well, forever, Klobuchar speaks and acts wisely and pragmatically.

This results-oriented approach should never be confused with a lack of sensitivity and empathy, of which she has an abundance. This was poignantly illustrated last night when the topic of opioid addiction was discussed with a woman who lost her husband to an overdose. This exchange took place roughly twenty-five minutes into this video.

In what is already a crowded field, made larger today by the entry of yet another unelectable Democrat –the 78-year old, far-left Bernie Sanders — there still are only three Democratic contenders that don’t have to parse their words because they’ve always been honest and open about their views. They are Ohio Senator Sherrod Brown, South Bend, Indiana Mayor Pete Buttigieg and Amy Klobuchar. They are all refreshingly unpretentious. And, oh yes, they are all from the Midwest, the battleground of battlegrounds come 2020: Democrats need to keep Minnesota and win back Wisconsin, Ohio and Pennsylvania. A Klobuchar/Brown ticket would do just that. But is the intellectually-challenged Democrat Party equipped to actualize such a glaringly obvious truth?

Fortuitously for Klobuchar, and her sometimes clueless party, the first major political contest for Democrats is less than a year away in the Iowa caucuses on February 3rd. Many candidates have suddenly discovered Iowa and begun visiting there over the past months; Amy Klobuchar has visited and nurtured relationships there her entire political career. She is the adoptive daughter and sister of Iowa, based on her substance and her genuineness. Likewise, no one will have a better ground game in Iowa than Klobuchar. No one.

The next huge step for those wanting to become the Democrat nominee for president is the New Hampshire primary on February 11th. New Hampshire has always voted independently of party edict and rewards those who speak truth to power. If last night’s town hall is any indication, Amy Klobuchar will do just fine in the Granite State. It is obvious how much granular detail she knows of New Hampshire, again, because she has been visiting there not just in the past few months but for years, creating and nurturing alliances.

In the final analysis, Klobuchar is the ultimate antithesis of the total train wreck of a human being who inhabits the White House today. She is of substance and truth, an upholder and guardian of the Constitution and American principles; he is of the childish tweet and self-promoting lies, an individual who inexplicably backs a murderous Russian dictator instead of our country’s national security experts and patriots. She has had the strength and wisdom to be a builder of bridges when the essential DNA of our government, bipartisanship, is mocked for momentary and superficial advantage by so many holding office. She has as her foundation and guiding light an endless energy of compassion for all, as he ruthlessly denigrates the most vulnerable among us. It is so time for the happy warrior.

Postscript: After I posted the story above, Jennifer Rubin of The Washington Post wrote a story about Amy Klobuchar as well. What might be most interesting about the Rubin story isn’t the story itself, but the reaction: within just a few hours not only were there over 700 comments from readers, the vast majority were positive.