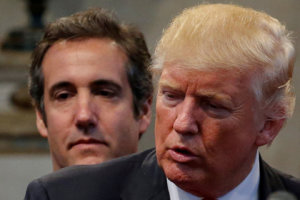 On Wednesday, the morally-challenged Michael Cohen will testify before the House Oversight Committee about the morally-challenged bankruptcy expert. It should be great fun, even if it’ll be difficult to distinguish fact from fiction, though not hard for the soon-to-be-released Mueller report. What’s truly laughable is White House press secretary Sarah Sanders bemoaning a “disgraced felon” spreading what her boss is spinning as lies. Well, I guess we’ll see about that in the near future.

The one fact that can’t be spun by this White House is the seemingly endless list of bad choices of individuals the bankruptcy expert selected as his key staff and enablers. Even if you believe that all those departing his orbit in hostile fashion are indeed lying, the fact is he chose them. What this means is yet another nail in the coffin of his self-professed brilliance as a businessman. I mean, the only people remaining loyal to him are those that profit from the loyalty. i.e. Family members protecting their inheritance.

This is quite the statement when you consider the bankruptcy expert is down to the D-listers to fill key positions, unless you think John “Doctor Strangelove” Bolton and the incessantly befuddled television tout Larry Kudlow are giants in their respective fields. It is one sorry group of hangers-on that would be a light year away from securing any position, much less a high level one, in any other administration.

On Wednesday, the next round of mudslinging will take place. All Americans can witness the depths that our political and social discourse have fallen. All by the choices of one man.