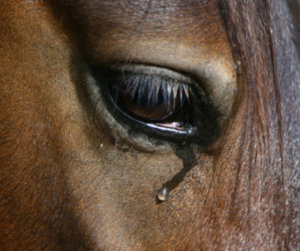 21 dead horses in just two months of racing and training at Santa Anita, the famed “Great Race Place”. And no one seems to know what’s causing it. This is likely due to the essence of the cause having accumulated over decades and decades and not necessarily something of recent origin, though the heavy rains in southern California could easily be a contributing factor. Meanwhile, lost in the headlines of the carnage at Santa Anita was the sorry spectacle of irresponsible racetrack officials in Arizona, where its horses have double the national fatality rate. Finally, after pressure from the state and from bad publicity, they finally started pre-race veterinary exams on all runners.

The reality is that Thoroughbred racing, in general, has improved its safety protocol measures through time. But the legacy of the sport included (includes) many participants, from racetrack officials to top trainers, who were willing to send injured or slow horses to slaughter. Some of these people are still around today and are publicly talking a different tune, which seems awfully convenient. But then I guess I’m cynical. Whatever the case, the earlier numbing in the sport of one’s sensitivity to the living, breathing, feeling Thoroughbred is inextricably linked to the excessive amount of racing in this country today.

In addition to staging too many races with too few horses (Do we really need racing in Nebraska in February?), thus necessitating incessant medicating, many breeding experts believe Thoroughbreds are more fragile today than ever before. This is the antithesis of a virtuous cycle. Likely the best hope to reverse this cycle is the goal of a relatively small, though growing, group of racing stakeholders that want to ban all race day medication. Some of this group are also concerned with supplements given to young Thoroughbreds to strengthen their bones. They fear that these supplements, while they make the young runners’ bones stronger, also make those same bones, as they age, turn brittle. Sadly, not unlike other sports, trying to conduct racing ethically and humanely can sometimes feel like a game of whack a mole. A certain 21 horses at Santa Anita are proof of that.