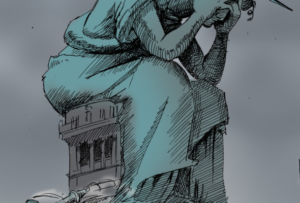 Last year Jon Meacham wrote a book, “The Soul of America”. As most of Meacham’s books are, it was exceptional in its granular detail and insightful perspective. Indeed, this book seemed to be salve on our ongoing and deeply embedded national wound by capturing other times our country failed and yet went on to get better. Think slavery, Joe McCarthy, the internment of Japanese and the lynching of innocents by the Ku Klux Clan. There was even a surprisingly popular movement based on the insane notion that Franklin Roosevelt and George Marshall were puppets of the Communists. And so as I read page after page of “The Soul of America”, I was lulled into thinking maybe what our country is experiencing today isn’t so much unlike these other times and that we’d get beyond it and be better for it. But after more thought, I really do feel this time it’s different.

We have had truly awful presidents before, both intellectually and ethically. But there has never been a time a president so proudly spoke against American ideals, was more inept, had a stable full of indicted and convicted enablers and yet still had the backing of a major party and 40% of the country. You see, in the past with awful presidents, they at least talked a good game, even if they were corrupt to the core. This one doesn’t bother, so we are left with the inescapable conclusion that principles and ideals, much less love and compassion, possess no importance to a huge portion of the population if it demonstrates that their tribes’ narrative is myopic and false. It further means that this huge portion of the population is perfectly comfortable with a president that is divisive, if not downright hateful of their fellow citizens, because he tells them what they want to hear and seemingly just don’t get he’s an incessant liar.

For a country to truly be exceptional, there has to be buy-in, a leap of faith that we are better together, accepting of our differences and yet joined in common purpose. This purpose doesn’t just happen. It takes a lot of hard work and can be frustrating because it truly is never done; it is always ongoing. There is absolutely nothing guaranteed. And so at this moment in our nation’s history, one has to wonder if we still possess that DNA:  From Many, One.