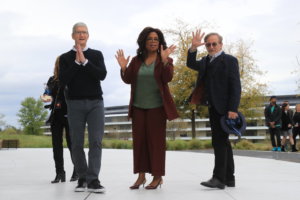 Is it just me or did today’s Apple event featuring the likes of Oprah Winfrey and Steven Spielberg and hosted by Tim Cook feel like just so very yesterday? If I’m in my 30s or younger (which, alas, I am not), do I care about any of these folks? I’m not being an ageist. I just think that Apple is, yes, a truly great company but it is no longer some “Oh, my!” type of influencer. Really nothing against Mr. Cook and company, but this event seemed underwhelming and more than a little empty. There was nothing revolutionary introduced. It was truly a statement that its core business has hit the proverbial wall in growth and now has to focus an ever-increasing amount of resources and energy into other avenues. Nothing wrong with that for a normal company.

Apple had never been a normal company. The powers that be at the Cupertino-based company had made us forget they were reaping in hundreds of billions of dollars. It was part of the mystique and fueled sales even more. So did its almost other-worldly products. But those days are over. Now it’s all about entering businesses already made strong by other companies.

Tim Cook is a very bright man and it would not be a surprise to see this latest move prove to be a huge success to the bottom line. In fact, with its incredible balance sheet and expansive list of products and services, Apple is likely undervalued today on the stock market trading at about 190, which is well off its record of 233, when it was the world’s first trillion-dollar company. But one of the reasons it trades so low is that markets love the wow factor that can potentially lead to explosive growth. Apple no longer packs this mojo. Which was inevitable. Which is sad.