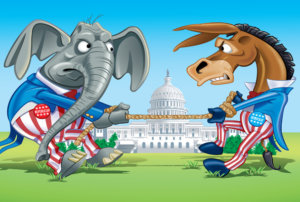 Let’s begin with the weighty topic of the all-powerful having the right to extinguish the life of another. Republicans, by and large, are pro-life/anti-abortion. They also are pro-capital punishment. In Republicans’ view, a fetus/living matter/unborn baby has undeniable and sacred value simply because he/she is a human being. But what Republicans illogically, politically and immorally refuse to live by is that actions an adult human being takes, no matter how despicable, does not void this very same sacredness of their humanity. Because of this, the state has no right to take the life of a human being. I might also add that minorities are disproportionately handed a death sentence and, stating the obvious, if the state is wrong in assessing guilt, there is no recourse for the executed.

Meanwhile, the vast majority of Democrats are anti-capital punishment. But if you’re a Democrat, especially if you’re holding national office, you’re pro-choice/pro-abortion. If not, you will be drummed out of your party. It’s pretty much that simple. That’s why it’s so painful to watch politicians like Tim Kaine and Joe Biden argue what to them is the indefensible. Hey guys, if you believe what you say you believe, that abortion is the taking of life, you can’t rationalize away your defense of abortion rights as an act of not imposing your moral views on others. This so much doesn’t wash. After all, it wasn’t that long ago (and unfortunately seems to be making a comeback) that some whites felt justified in causing harm to blacks. Opposition to this ugly bigotry was all about morality. It might be uncomfortable to state the truth about abortion but here it is: adult human beings have decided that their lifestyle choices outweigh the rights of a fetus/living matter/unborn baby to exist.

Democrats love to continue to throw money at government programs whether or not they actually do any good.  They would love to force all kids into public schools, even those miserably failing, which is a frighteningly high percentage, instead of letting the disadvantaged attend better schools, private or otherwise. They do this under the guise of separating private religious schools from the secular. (But the reality is that the secular is a religion of sorts as well.) In short, Democrats want to condemn students wanting a better education to inferior schools.

But then Republicans are oblivious to core rights for all, from their ongoing assault on Obamacare with no alternative should it be vanquished, to the totally absurd obsession with reducing food stamps. All of this Republicans do while they perpetrate the largest cash giveaway ever to corporations and the 1%.  Yes, there will always be some abuse of government programs, so the food stamp program is not an exception. But even with abuses, food stamps truly help the neediest among us and they are an incredibly efficient use of dollars to stoke the economy. None of this food stamp funding goes into some millionaire’s or billionaire’s bank account to sit. This funding is used almost immediately.

As much as I have been agnostic about political parties, there is a major exception. I believe the true conservatives of the Republican Party have all but left it (think George Will, Bill Kristol, etc.), possibly about 20% of the GOP. This leaves 80% of membership in lockstep with a narcissistic, vitriolic, xenophobic racist, who has no problem undermining the law of the land for his own interests. On this one issue with Republicans, there is no parity with Democrats. We’ll never know if there were a Democratic bankruptcy expert if 80% of the Democrats would be in lockstep with him or her. But the fact is, today, Republicans have abdicated their responsibility to protect the Constitution and therefore have abdicated their responsibility to protect and nurture America.