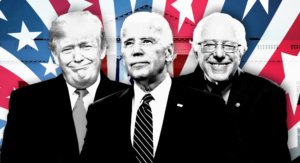 The life expectancy of a man in the United States is between 76 and 77 years. The rate of dementia doubles every five years upon reaching the age of 65. Most staggering is that between the ages of 80 and 85, roughly half will suffer from dementia.

Meanwhile, both political parties are paying absolutely no heed to the very real fact that each is playing dementia roulette, much less mortality roulette. By the time of inauguration 2021, the bankruptcy expert will be 74. Joe Biden, who has just thrown his hat into the ring for a run at the White House, will be 78 and good ol’ Bernie, and I do mean old, will be 79!

Just what are Democrats thinking? (It’s pretty obvious the Republicans think of only one thing and that is placating their dear leader.) I mean, I could point out that as nice a guy as Joe Biden certainly seems to be, he just may be one of the worst presidential candidates ever. In addition to getting crushed in 2008 against Barack Obama, though Joe did pick up a great side gig afterwards, Biden ran for president in 1988. But somehow he couldn’t find a way to beat…Michael Dukakis! It is now 2019 and Joe is back. Again. Really?!

Then there is Bernie Sanders. When I think of Bernie, I think how comforting it must be for him to live in an absolutist’s world, a world in which there is simply no accountability (or experience) in actually solving problems. Tell the people what they want to hear, I tell you. Sound familiar?

Even if one disagrees with my assessments of Biden and Sanders as terrible choices to become the next president, I still have the patriotic argument on my side. They. Are. Simply. Way. Way. Too. Old. They also happen to be men and white, but that’s a subject for another day.