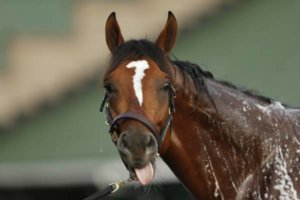 Maximum Security was undefeated going into the Kentucky Derby Saturday. As far as he’s concerned , he still is. And don’t think horses don’t know when they beat other horses. But, somehow, the stewards, the cops who officiate horse racing, didn’t get it. They disqualified Maximum Security and gave the win to Country House, a horse who had absolutely no excuse in not getting by Maximum Security. But by some arcane rules, the stewards awarded Country House the victory he didn’t earn nor deserve.

In short, the front-running Maximum Security had the lead in the Derby coming into the final turn — that is, the turn heading into the straight-away to the finish line of what’s called the stretch, that last bit of real estate to the finish line needing to be navigated in front of the grandstand of 150,000 crazed racing fans. Being the equivalent of an equine adolescent, Maximum Security was startled for a moment and briefly veered a path or two out from the rail at which time he came into the path of the tiring War of Will. Meanwhile, Country House was far on the outside and was not impacted by Maximum Security. The race ends with Maximum Security, in a gallant effort, putting away Country House by almost two lengths. Let’s be clear: Country House was never, ever, getting by Maximum Security, who still remains as a most special horse who has never been headed where it counts: at the wire.

So, what to make of this? If this were even a year ago, Maximum Security does not get disqualified. But the stewards, overwhelmed in keeping up with today’s tidal wave of negative publicity about the sport, totally overthink what should be a simple, common sense decision. They disqualify the true winning horse and award the victory to an impostor.

It was another sad moment for a sport pummeled by bad news emanating from archaic training methods of these wonderful animals and by corporate giants who have used horses to access the riches of slots, be they the traditional ones or the ones that tie in racing results in what’s called historical racing. But make no mistake, these horses have been leveraged for the fortunes they could produce in other forms of gambling.

But what was most telling, and incredibly sad, about today were the responses of the trainer and jockey of Country House. The trainer, Bill Mott, has been one of my favorites for a very long time. He is a great horseman, one that seems to have truly always put the horse first beyond all other considerations. But today he was talking legal terms instead of the sport. He was telling a national television audience how his horse should be awarded the win even though he knew the horse did not, in any way, deserve the win. But it was even worse with his jockey Flavien Prat. At first, he said his horse was not impacted by Maximum Security, which was the truth. Then, a few minutes later, he begins talking about his horse being bumped and going off stride. A. Total. Lie.

I have loved this sport for almost my entire life. And yet, again, I see selfish, myopic people ruin it by grabbing whatever they can get; it makes no difference to them what is right and what is wrong. So let me be clear: EVERYONE knows who won the Derby and it certainly wasn’t Bill Mott, Flavien Prat and Country House. Shame on the humans. Again.