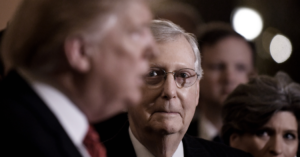 The Democrats in the House kicking and screaming about a Constitutional crisis is an act in futility. The bankruptcy expert (and after reading the New York Times article on his massive losses, it only reinforces how this moniker is spot on) has his stable of Republican enablers that will render subpoenas powerless. This means that inevitably this will all be decided in the courts. About five years from now.

It is nothing less than amazing, in a really sad way, to see what a White House can get away with when you have soulless and moral cowards like Mitch McConnell who are willing to do just about anything to hold onto power. Compare his pitiful moral relativism with a John McCain, former Ohio Governor John Kasich or Maryland Governor Larry Hogan. Of course, this list of Republicans is comprised of a governor, a former governor and someone who is dead. There is literally not one Republican senator or member of Congress who has consistently stood on Constitutional and moral principle in opposition to the bankruptcy expert. And so House Democrats’ increasingly demonstrative protestations only fuel their opposition’s base and tend to numb the independent voters. This means there is only one path to a renewed America: the ballot box.

How’s that going? In that it’s an eternity until the primaries begin, much less the general election, it would be premature to come to any hard and fast conclusions. But there are two troubling signs for Democrats. The first is that most of the 4,228 candidates seeking the nomination are falling over themselves to not dare ruffle the feathers of the far left. Now, in fairness, this is what usually happens in primaries. Candidates speak to the base because these are the people voting in the primaries. Then, most times, the actual nominee in the general election tempers their message. Still, this election cycle many Democrats look so foolish being politically correct and “progressive” it is difficult to imagine how they would successfully pivot in the general election.

The second troubling sign for Democrats is that I have yet to see a candidate who has a transcendent message for America. Americans vote aspirationally for president, if they have the option. Look no further than the two heroes for their respective parties: Ronald Reagan and Barack Obama.