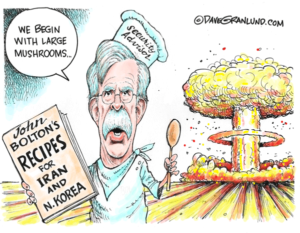 So as the bankruptcy expert continues to sow chaos here in the United States, foreign policy had been well off the radar. But with the tenure of John Bolton as the United States National Security Advisor ongoing this might be just about ready to change. The fact is John Bolton, someone who did everything he could to avoid fighting in Vietnam, has no problem with being promiscuous when it comes to sending others in harm’s way. Bolton, you see, is for regime change in over a half-dozen countries including a completely non-threatening one as in the case of Cuba. But the country’s regime change he craves the most is Iran. He has from early on. And now it seems the United States is forcing Iran into a corner. This could get ugly.

The possible saving grace is that our allies, though many times rebuffed by the White House, are still our allies and still are sane. It is highly unlikely that military action by the United States would have any support from our allies. If this were the case, even the spineless Republican enablers of the bankruptcy expert would be hard pressed not to strenuously object to military engagement with Iran.

That said, this situation does amplify the very real danger present when an ignorant, unread, unqualified and emotionally unstable individual inhabits the Oval Office and who has surrounded himself with chicken hawks. An adult in the room is sorely lacking. Now, with no adult in the room, the military is on high alert and non-emergency State Department employees in Iraq are being ordered to leave immediately. And with these developments Iran and the United States have thus entered into a hair-trigger environment.