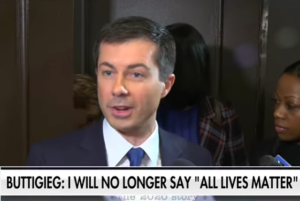 This week I’ve binge watched Pete Buttigieg, mayor of South Bend, Indiana and suddenly a very viable candidate for the White House.  Mayor Pete, as he is affectionately known by his supporters, is a remarkable individual. When he first entered the scrum attempting to become the Democrats’ nominee for president, it was easy to dismiss him. Is the country really ready for an openly gay president? Is the country comfortable to elect a mayor of a small town in Indiana to the highest office in the land? At the age of 37? But then you listen to this guy and see how he has conducted his life and those aforementioned aspects of his life fade in significance. He is a man of faith, who went to Afghanistan to serve his country, has a keen intelligence and an insightful, compassionate perspective on humanity and this country’s need for renewal. But then, this most capable of Democratic candidates almost flippantly exposes what could be in the Democrats’ DNA of self-sabotage: Hubris. It’s that arrogance of self-congratulation and self-affirmation that your way is, after all, really the only way. It is patronizing as hell. Being patronized transcends policy papers in elections. It just does.

Ross Douthat of the New York Times references similar in a recent column. Douthat’s overriding point is that the Democrats have this expansive litmus test for its candidates, but with limited depth of commitment. i.e. The latest wave of “progressives”, whatever that term means, seem all to ready to jump ship should they not get their way on every issue. This immaturity and lack of perspective thus forces the faux-inclusive Democratic Party to cower in the corner to appease their children by adopting absolutist positions on key issues, issues that, by themselves, can sway a voter.

In Mayor Pete’s case, he is all but completely blind to what the majority of Americans feel is barbaric: late term abortion. In his many interviews, Buttigieg defaults to the go-to line of the far left that these late-term abortions are but a tiny number so as to be inconsequential. But then a hole you can drive a truck through surfaces in that argument when it is factually pointed out to him that between 6,000 to 7,000 late-term abortions take place every year.

Then Buttigieg defaults to the next specious talking point by the far left about late-term abortion that, after all, one of the genders is somehow infallible in their judgment. That is to say, that women never ever err or are never abusive in serving their self interests. Which is totally absurd, which is why child abuse laws are on the books.

Then Buttigieg defaults yet again to another talking point of the far left when he states that no one can know where the line is when life begins. This is, at best, an attempt at misdirection, if not an actual lie. Yes, you will have some who feel life begins at conception and there will be others who feel life begins at various points within the first two trimesters. But, in fairness, others will disagree that life begins sometime in the first two trimesters and science can be used by both sides, incompletely so, to bolster their respective opinions. But science can indeed determine when a human life within the woman is viable and when this now viable human being can feel pain. And it is the third trimester. Science, Pete. Science.

Pete Buttigieg is a very bright man. He knows that at least some late-term abortions (possibly…most) are not performed to save the life of the mother or because of acute health issues for the now viable human being. But Pete Buttigieg chooses a tactic out of the  bankruptcy expert’s playbook: anti-intellectual, anti-science rhetoric to defend an indefensible position. By doing this Buttigieg all but eviscerates his brand of intelligence, honesty and compassion.

This strategy will likely do no harm to him in the primaries. After all, you simply can’t be pro-life/anti-abortion in the Democratic Party. But this absolutist abortion stand, like other absolutist stands of the Democratic Party on which people are asked to leave their brains and hearts at the door, could actually spell doom in the general election. At their core, these stands are both hypocritical and condescending. Likewise, if we hadn’t known it before 2016, we know it now: resentment is a powerful force, likely the most powerful. And the Democrats keep sowing it.