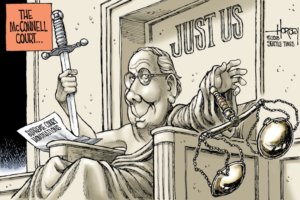 Kentucky Senator Mitch McConnell continues to bolster his sorry legacy as majority leader, a legacy that has crushed American principles and has all but assured the demise of our country. Besides his dog whistling to racists during the Obama era and his enabling of the bankruptcy expert, McConnell has eviscerated the standing of the Supreme Court. No matter how much Supreme Court Chief Justice John Roberts tries to persuade otherwise, the Court is quickly becoming viewed as yet another partisan hack job.

The latest outrage, although the bankruptcy expert and his spineless lemmings of the GOP have pretty much numbed us to outrage, is McConnell saying he’d have no problem filling in a vacancy on the Supreme Court during the election campaign next year. In case you forgot, McConnell blocked the nomination of Merrick Garland to fill the seat of Antonin Scalia because there was — you guessed it — an election campaign going on. Basically, McConnell’s latest words are emblematic of his hypocrisy and total disregard for the legitimacy of the Supreme Court.

Neil Gorsuch was illegitimately appointed to the Supreme Court, since Mitch McConnell blocked the legitimate nomination of Merrick Garland. Then later Brett Kavanaugh was voted in as the Supreme Court justice to replace the retiring Anthony Kennedy on a strict party line vote except for Republican Lisa Murkowski who voted thumbs down. Even if you did not believe Christine Blasey Ford, who accused Kavanaugh of sexual misconduct, it was impossible to be overly impressed with his petulant child responses during his confirmation hearing.

If McConnell had not been improperly manipulating the process, chances are Garland would be a Supreme Court justice and so would Gorsuch. Likewise, both would be considered legitimate and therefore the Supreme Court would be a branch of government strongly respected in its upholding of the Constitution. But now the opposite is true. Mitchey has seen to that.