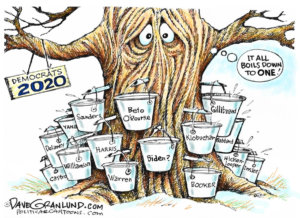 The first Democratic debate is in the books, thankfully. This debate is politics at its most annoying. In fairness, having ten candidates debate is a contradiction in terms. What we largely got were rehearsed lines, if not speeches. But at least it began the process of mercifully reducing the Democratic field.

The most notable candidate who all but eliminated himself from the competition was Beto O’Rourke. He peaked in his run for Texas senator against Ted Cruz in 2018. But maybe all we saw then is how godawful Ted Cruz is. O’Rourke’s stock has been going down ever since and his tepid, shallow performance last night sealed his ultimate demise.

Meanwhile, the politician polling the highest of those assembled last night, Massachusetts Senator Elizabeth Warren, made no errors and continued her rapport with the far left of the Democratic Party. As she would be unelectable in 2020, she still speaks to the true believers and will therefore be around come primary season.

Ironically, Warren also helps centrist candidate Minnesota Senator Amy Klobuchar. As Klobuchar does not drink the Kool-Aid of the “progressive” Democrats, she also came off as both one of the adults on the stage and the rare Democratic candidate who can actually speak to the entire country.

According to many of the pundits’ post-mortems, the candidate that exceeded expectations was Julian Castro, former HUD secretary, largely due to his passion when speaking of immigration with the backdrop of the Salvadoran father and daughter who drowned while trying to cross the Rio Grande.

The only other candidate to make the cut from Wednesday’s debate was New Jersey Senator Cory Booker. In a field filled with them, he is arguably the greatest self-promoter in the race. His future chances are all about his ability, or lack thereof, to be perceived by voters as genuine.

Now, tonight, it is the debate between those considered by many to be most of the major contenders. But I have my doubts this debate will produce more viable presidential contenders than last night’s. Why? Because, in handicapping terms, two of the favorites are throw-outs: Joe Biden and Bernie Sanders. Besides being 80-year-old white guys in the Oval Office, if elected, they’re simply not credible candidates. As much as one can personally like Joe Biden, he has been in past presidential runs an awful candidate. There is no reason to believe he will do any better this time. Plus, American voters tend to look ahead, vote aspirationally. Biden is all about looking at the rearview mirror.

As for Bernie Sanders, his run in the sun was in 2016 and whatever luster there was continues to erode. Some of his proposals may still play well to some of the base. But this sector of the party has become crowded.

South Bend Mayor Pete Buttigieg has been the flavor of the month until his recent race relations problems that have exploded again with his city’s police department. As Buttieg is bright and likable, he is light on experience and has major challenges running a town of just 100,000. Buttieg would be better served by a run for senator or governor.

Another “major contender” debating tonight will be California Senator Kamala Harris. Harris is having some difficulty gaining support in her home state. That said, she has the resume. But can she connect with voters?

The two candidates to watch for a possible break-out tonight are Coloradans: former Governor John Hickenlooper and Senator Michael Bennet. They both occupy the center of Democratic politics. They’re successful politicians who are currently off the radar. This means the bar is set low for them tonight, a bar that one of them is bound to eclipse.

Lastly, even though the first debate, this is likely New York Senator Kirsten Gillibrand’s final shot at gaining traction. She has been a high profile politician and candidate in the media capital of the country. But her campaign has landed with a thud. Stay tuned. Or not.