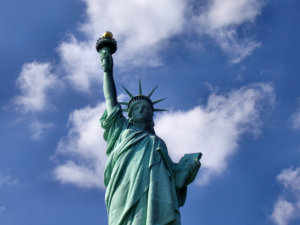 Concentration camps for the huddled masses. Thousands of unborn children via third trimester abortions disposed of by “doctors”, which the far left calls “heroes”. Capital punishment of minorities.

A Democrat party which seems to be promoting candidates with policies almost no one wants. i.e. Medicare for all, thus eliminating private insurance, which over 150-million Americans have and like. A Democrat party that is so lustful for votes it’s willing to throw open the borders to anyone and everyone, regardless of the basic rule of law in immigration.

Speaking of the rule of law, how utterly and totally disgraceful are Republicans by being in lockstep with the petulant child who wants to be a dictator by trying to invalidate our national security efforts, our legal system and the freedom of speech.

What about the new darling of the left, Kamala Harris? Is she the unifying figure the country so desperately needs or a typical politician that will do just about anything to curry voters’ favor? Here’s the point: Joe Biden is and always has been a terrible presidential candidate. I’ve written about this before. But Joe Biden, as inept a candidate as he truly is, is not a racist, the exact opposite. But Kamala Harris likes to score points, so she wants to go back decades to find what would now be considered the politically incorrect. Harris, in a nutshell — so to speak, is an opportunistic jerk. She is a small person because she is all about herself. Haven’t we had enough of that already?

Frankly, I’m not sure there is hope. The Republican Party has shown its true, ever so ugly colors. It all began with Mitch McConnell who didn’t have the moral integrity to shoot down, unequivocally, the birthers’ rants against Obama. Instead, he has enabled a racist to gain the highest office in the land. A total sacrilege. Really, if you’re willing to sell this down the river, what else is there?

This country is in deep. There’s no doubt we can bully ourselves through a few more decades. But America stands for something greater, an aspiration. This is something the entire world needs. But I don’t see the path. Just who is going to be the happy warrior? Just who is going to stand up to all of the institutional forces and say, Enough already!