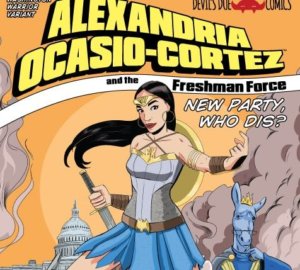 When Fox News points out an error by the bankruptcy expert, you know it has to be a doozy:

President Trump doubled down Monday after taking heavy fire for inflammatory tweets calling on Democratic congresswomen to “go back” to where they came from — even though most of his intended targets were born in America.

Even some of the cowardly Republican enablers knew the above tweet directed at Alexandria Ocasio-Cortez (AOC) and her gang of four was racist at its core. But it also demonstrates just how easy AOC is to play.

It isn’t like the racist sentiment of the tweet is news. It is quite obvious at this point that the tribalists on the right will accept just about any denigration of morality and the law that the petulant child can concoct. He has exposed just how anti-democratic, xenophobic and ignorant many Americans are. So it seems to me that to continually enter into outrage after outrage with the bully just fuels this base. It also puts a face on the Democrat Party that could, astoundingly so, make it lose the 2020 presidential election to a completely inept, amoral and deeply mean-spirited narcissist.

It might be time for Obama to step in, privately, and tell AOC it’s time to take a time-out. But immature children tend to believe they have somehow come up with the keys to the kingdom unlike anyone else has before or will likely do so in the future. Her act is already old and she’s not even 30.