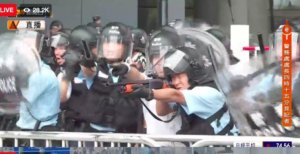 In this age of ever-increasing moral relativism, if not downright immorality, it can be easy to not fully appreciate what’s taking place in Hong Kong. As the petulant child in the White House has had no qualms in becoming friends with total thugs while dissing democratic allies, there stand the people of Hong Kong fighting the barbarism of mainland China. There they stand with courage. Alone.

This is not just any conflict. This is a universal seismic moment. The odds are stacked against the people of Hong Kong seeking freedom. It is wise to remember that as China may have modernized its economy and technology, it remains in the stone age regarding basic human rights. If the people of Hong Kong are ready to die for their freedom, will China find a face-saving way to extricate itself from the mess it created? Or will China start to attack and kill? And if the latter, will our country care enough to do anything about it? Or will this be just another Saudi Arabia?