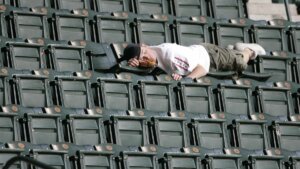 The disclaimer here is that I used to know a lot about baseball. But those days of knowing every player and key statistics are over. That said, I still love the essence of baseball. This is especially true during this time of year when those pennant races really heat up. Except when they don’t.

The closest pennant race in the American League is in the Central Division. Ok, to be honest, it’s the only pennant race taking place in the American League and, frankly, with just sixteen games to go and being five games back, the Indians are borderline to still be considered a pennant contender against the Twins. But at least the Indians are in the 3-way hunt for the two Wild Card spots. This means there are fans in only three American League cities fully participating in the nail-biting, cave into every superstition stretch drive.

The National League is better when it comes to the Wild Card race, with five teams still very much in the thick of things. But the pennant races are lacking almost as badly as the American League’s. The Dodgers have already clinched the West and the Braves have all but done the same in the East, being ahead of the Nationals by 9 1/12 games. The NL Central, however, is still somewhat in play, even though the Cardinals now have a four-game lead over the Cubs and a five-game lead over the Brewers. The NL Central has been the most competitive division in baseball this year. But that’s due, in part, to the top three teams being equally uninspiring rather than hitting on all cylinders.

And so it is: a rather bland end to the regular season, a season marked by 1,234,198 home runs. Really exciting. Until it wasn’t.