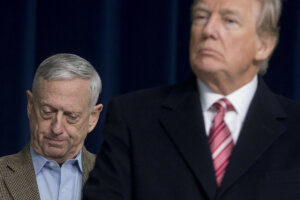 It seems that there is factual convergence by the Wall Street Journal, the New York Times and the Washington Post that the bankruptcy expert repeatedly (eight times) pressured Ukrainian President Volodymyr Zelensky to turn up dirt on Joe Biden’s son, Hunter Biden. Even the Fox News website had the story top of the home page before someone there had it buried at the bottom of the page and calling the story partisan.

At this point in time, when there is concrete evidence of illegal, unethical and anti-American actions made by the bankruptcy expert, certainly there has to be at least one Republican who will pull a Howard Baker and call out the corruption.

Leading up to this point I had been against impeachment; the political will just wasn’t there on the Republican side. Without ethical and courageous Republicans in the Senate, who will finally break ranks from the poison in the White House, impeachment would be political malpractice for the Democrats. But the occupant of the White House pressuring a foreign leader to turn dirt up on a political opponent must lead to impeachment, especially in the context of his cozy relationship with the murderous dictator who tried to sabotage our 2016 election.

If I had to take a guess what Republican will finally break ranks it is former Secretary of Defense Jim Mattis. If so, other Republicans will follow suit. Even Fox News will have problems demonizing Mattis. What I will never understand is just how widespread the cowardice has become in the GOP. In simplest terms, it is obvious many Republican politicians know how corrupt (and incapable) this administration is and yet they say nothing. We’re seeing firsthand how what was once a functioning democracy is eroded from within by a wannabe despot, while an ignorant and apathetic public are whistling past the graveyard.