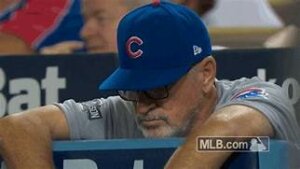 Being a lifelong White Sox fan, after having also been a fan of that other Chicago team as a kid but departing the friendly confines in the early ’70s, readers might think I’m trying to be snarky here by welcoming the Cubs back to Chicago. But true Cubs fans get it.

You see, we’re Chicago fans, and with the huge exception of the Michael Jordan Bulls…We. Just. Never. Win. But in 2016, the gods of baseball seemed like they were ready to shake up the order of the universe. The Cubs, after having not accomplished this feat since before the virgin birth of Jesus, won the World Series in 2016. Not only did they win the World Series, normally reserved individuals, people like conservative columnist and baseball/Cubs aficionado George Will, began talking dynasty. Oh, George, the exuberance of youth!

But now, three years after reaching the mountaintop, the Cubs have lost but all chance at the post-season, thanks to the superiority of their arch-rivals, the St. Louis Cardinals, who have found ways to beat the Cubs three straight at Wrigley (or the Cubs have found ways to to lose three straight), so we now need to embrace their Cubness, their Chicagoness. The same was true for me and the White Sox after 2005. I was so blown away by their sweep of the Astros in the World Series, I couldn’t emotionally accept that most of the players, to say nothing of the traveling secretary and locker room attendant, were having career years…after decades of that not being the case with previous players.

But now the White Sox have stunk it up for quite a number of years in the surreal world of baseball, which now features a bunch of terrible teams trying to become even worse so, one day, they can become good. This kinda worked for the Cubs. No, I take that back. IT WORKED. THE CUBS ACTUALLY WON A WORLD SERIES! But, only one year.

Real Cubs fans and real Sox fans will always cherish 2016 and 2005, respectively. Maybe, just maybe, both true fans of the Cubs and Sox cherish both of those years. It’s a transcendent exclamation point on a love far greater than post-season success.

I miss my Comiskey and the personalities that made a team singular to me, a love affair, really. Impossible to explain — some mix of life’s and summer’s promise, tempered by the reality of consistent defeats. Somehow, the ongoing quest was the beauty, the reward, rather than the glory in October. That glory was for someone else. But that was ok. Glory, after all, is not what life is about.

So, through the past years, as I have been far away from my childhood home of Chicago, I have found solace in watching the Cubs at Wrigley on national broadcasts. These broadcasts almost always have aerial views of the spectacular skyline along the great lake known as Michigan. There is no skyline in the world that can match it. That said, the best view on these broadcasts is of Wrigley itself, forever etched in time and yet timeless. If you know and feel baseball at all, you love Wrigley. Let me put it this way. A wonderful movie was made a number of years ago called “The Field of Dreams”. As magical as the ball field was in that movie, it had nothing on the real-life Wrigley. Nothing.

So by tomorrow I am sure there will be many who will act as if Armageddon has arrived in Wrigleyville, that Joe Maddon must be fired because the Cubs will likely not make the playoffs. (Sometimes the front office likes to blame the manager, if you can believe that!) But I think all of this is so terribly misguided. Isn’t Joe Maddon exactly the type of guy you want as manager of an other-worldly baseball team, a team and a ballpark that are so much larger and more important than post-season stats? After all, the players never quit on him; they just had nothing else to give. Maybe the fact we all love the Cubs, no matter what they do, should be a teachable moment, to say nothing of an invaluable asset to all of baseball. Either way, for me, welcome back, Cubbies. You will always have a home in Chicago.