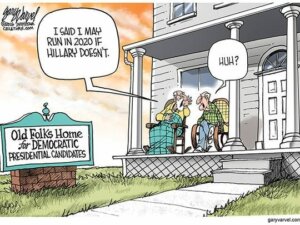 A blocked artery near the heart of Bernie Sanders did the Democrats a huge favor this past week. It placed an exclamation point on how two of its front-runners, Sanders and Joe Biden, are, well, friggin’ ancient! If Biden is elected, he’d be 78 years old when he took the oath of office; Sanders 79.

When it comes to the highest office in the land, I am an ageist. An individual at this age is exponentially more prone to diseases, such as Alzheimer’s, compared to someone in their 50s or 60s. And we all know how a once vibrant and sharp seventy or eighty-something can deteriorate very quickly when afflicted by a disease and the ravages of time.

The other Democrat front-runner is another seventy-something, Elizabeth Warren. She’d be only 71 when she would take the oath of office, a veritable child.

The other senior in the race, the Republican who has already shown an alarming lack of contact with reality, is the bankruptcy expert himself. He would be checking in (or out, as the case may be) at 74 for a second inauguration.

The Democrats have to get beyond the 70-something top three. Primary voters, who are older and more extreme in their leanings, might like them, but these candidates would not be loved by the general electorate come 2020. Who would? Amy Klobuchar.

At 59, she is in the prime of her political life, a time when she has attained the essential knowledge and gravitas needed for the office, while also possessing the energy and intellect to meet the intense challenges and pressures of the White House. Just as important is the fact that she is one of those rare Democrats who wins districts that voted for the bankruptcy expert in 2016. She is the ultimate anti-bankruptcy expert. Whereas he is all about beligerrant polarization, she is all about a calming unification. But she’s also tough, especially important today as the current administration has curried favor with just about every awful, murderous dictator on the planet. Amy K would crush it in 2020.