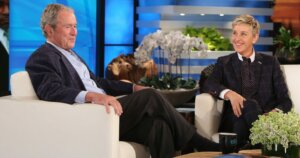 Sometimes it can be a somewhat daunting task to embrace the day with a look at the news. It’s especially been like this since a certain November day in 2016 when the bankruptcy expert was crushed by 3,000,000 in the popular vote but still won the presidency. Since this time, he has led an all-out assault on core American principles and decency. So today as I began my perusal of various websites, from the Wall Street Journal to the Washington Post to Fox News, I wondered what tribal warfare story would grab the most attention. For some of the far left, the bankruptcy expert took a backseat to….Ellen DeGeneres! Really, I’m not kidding. It seems Ellen committed the mortal sin of hanging with George Bush at a Dallas Cowboys game.

You have to read not just this story but a few of the readers’ comments as well. This is an example of how the left has tainted American politics and American life, though nowhere near as much as the current occupant of the White House. It is sobering to read such blanket condemnation from the left of a mainstream politician.

Did they not notice how the Obamas have embraced Bush? They refer to Bush’s anti-gay politics. In 2004. President Obama didn’t change his politics on the issue until Biden forced his hand in public. Simply put, people have the ability to change, for the better. Forgotten by these myopic critics is the ultimate in statesmanship after 9-11, when Bush met and embraced Muslim leaders publicly. Forgotten is that Bush’s policies (and huge commitment in cash) to combat Aids in Africa likely saved millions of life. So for all you leftist saints out there who find it so easy to judge and are too lazy and biased to do actual research on the totality of an individual, Ellen is the antidote to your ignorance and hate. It is amazingly sad that our country is being ripped apart, on purpose. It is almost as sad that when people with opposing views who choose to live in comity are pilloried.