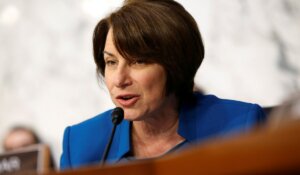 I have written about Minnesota Senator Amy Klobuchar as our next president for close to a year. I have also imagined exactly what the Democrats’ dream ticket would be, a ticket that would crush the bankruptcy expert. And earlier this year, more with my heart than my head, I wrote of her momentum picking up steam. But now the heart and the head match.

First, Klobuchar just qualified for the November debate, after a strong performance in October’s edition. It seems as if sane independents, Republicans and Democrats are finally beginning to realize what a train wreck Elizabeth Warren would be. (And make no mistake about it; she’s the one to beat. The 78-year-old Sanders was toast even before he had a heart attack and does anyone in their right mind think 76-year-old Biden is a viable candidate?) But more than the negatives of a Warren candidacy are the positives of Klobuchar.

From The Economist to George Will , Klobuchar is being accurately portrayed as the adult in the room, someone who is strong and smart and, yes, unifying. Basically, the exact antithesis of the petulant child in the White House. Basically, what a vast majority of moderates and independent voters crave and what this country desperately needs.

What stands in her way? The hard core far left of the Democratic Party. Somehow this group feels you fight one extreme with another. No. You. Don’t. It would just heighten the polarization. Likewise, did the Democrats miss the message of the 2016 election? Do they really want to follow up Hillary as a nominee with a 70-year-old Massachusetts-liberal, “hectoring schoolmarm”, as George Will describes her? T-O-N-E. D-E-A-F.

There are also some who criticize Klobuchar for having been tough on her staff in the past, as if that would be disqualifying. Really?! Have these folks looked at the potty-mouthed, moral and Constitutional disaster presiding at 1600 Pennsylvania Avenue? I want Amy K’s toughness, her prosecutorial expertise to confront and overwhelm the person responsible for degrading the most American of ideals and leadership. Let’s hope the Democrats do as well.